BHUBANESWAR: The State Government has formulated new regulations to control vector-borne diseases. The Odisha Epidemic Diseases (Malaria, Dengue and Japanese Encephalitis) Regulations, 2018 aims at monitoring the management of diseases.The new regulations prescribe procedures to be followed in case of suspicion and confirmed cases besides the power and functions of inspection officers, who can enter any premises for fever surveillance, treatment, anti-larval measures or fogging. Doctors in Government health institutions and registered practitioners in private hospitals or clinics are required to get the blood slides prepared for each case of fever reported apart from the currently adopted procedure of Rapid Diagnostic Test (RDT) for malaria. 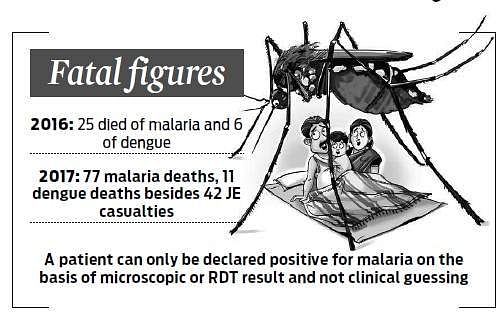 The RDT to be used for diagnosis will be only Antigen Detecting Rapid Test and should be technically approved by National Programme Division. A patient can only be declared positive for malaria on the basis of microscopic or RDT result and not clinical guessing.As per the regulations, private hospitals need to send information on malaria positive cases to the nearby Government health facility immediately after diagnosis. The blood slide of the positive cases should also be submitted to the representative of the Department of Health and Family Welfare within seven days.

The Department officials in turn will ensure complete radial treatment of malaria positive cases with chloroquine or Artemisinin Combination Therapy (ACT) alongwith Primaquine as per the National Drug Policy.The doctors in the public health institutions and registered private hospitals would immediately inform the Additional District Public Health Officer (Vector borne diseases) or Chief District Medical and Public Health Officer if a suspected case of dengue or Japanese Encephalitis (JE) is reported at their centre.

“The regulations will come into force at once and remain valid for two years from April 21. Violation of any of the provisions of regulations will be deemed to be an offence committed under section 3 of the Epidemic Diseases Act, 1897,” a notification stated.While 25 persons had died of malaria and six of dengue last year, the State had recorded highest 77 malaria deaths, 11 dengue deaths and 42 JE deaths in 2016.