BHUBANESWAR: The Rs 11,000-crore Punjab National Bank (PNB) scam has cast its shadow on Odisha Government’s ambitious gems and jewellery park.The Rs 685-crore project, proposed in Cuttack’s Ramdaspur, was to be set up by Gitanjali Infratech Ltd, a unit of Gitanjali Gems Ltd owned by Mehul Choksi, maternal uncle and business partner of billionaire jeweller-designer Nirav Modi.Now that Choksi along with Modi has been accused in what is billed as the country’s biggest bank fraud, top State Government sources admit that Gitanjali Gems, Jewellery and Lifestyle Park - the first of its kind project in Odisha - looks difficult. 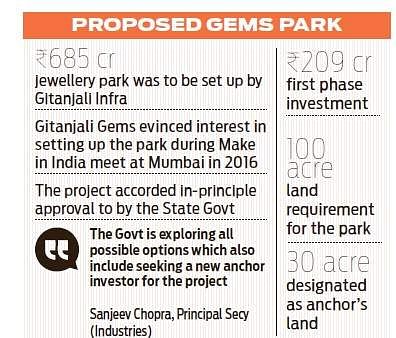 During the Make in India meet at Mumbai in February 2016, Gitanjali Gems had evinced interest in setting up the gems and jewellery park in the State and submitted a proposal to the delegation of Odisha Government. Later, the State Level Committee (SLC) of the Government accorded in-principle approval to the project. Since Gitanjali Group was anchor investor in the project, the Government is now weighing its options how to keep the project going after the company’s alleged link to the bank fraud came to light. “The Government is exploring all possible options which also include seeking a new anchor investor for the project,” Principal Secretary to Industries Department Sanjeev Chopra told this paper on Saturday.

Land requirement for the park was indicated at 100 acre of which 30 acre was designated as anchor’s land for development of facilities by Gitanjali as well as its other brands. In fact, Gitanjali Group has already paid for the 30 acre but its possession is yet to be handed over to the company.The proposed components of the park included precious and semi-precious diamond cutting, polishing, designing of gold, silver, platinum and diamond jewelleries, fashion jewellery and lifestyle products apart from retail centers and export houses.Gitanjali Gems had also proposed to bring in its associates and promoters such as Asmi, Nakshatra, GILI, Sangini, Nirvana, Kairana, Valente, Viola to the industrial park.

The proposed Rs 685 crore investment was planned in three phases with the first phase estimated at Rs 209 crore. For infrastructure development, including common facility centres, an expenditure of Rs 129.5 crore was earmarked. Apart from adding to country’s jewellery export might, the project was to create employment potential for about 16,000 people. Chief Minister Naveen Patnaik had attended the ground breaking ceremony of the park in November 2016.

Now we are on Telegram too. Follow us for updates
TAGS
PNB fraud Gitanjali Gems Nirav Modi Odisha