BHUBANESWAR: Chief Minister Naveen Patnaik on Monday announced another package for the farmers under which the State’s Millets Mission will be expanded by spending Rs 100 crore for the benefit of around five lakh small and marginal farmers in tribal dominated districts. The Chief Minister also said the fund would be scaled up in future.

“The State Government will procure millets to provide remunerative price to the farmers growing the crop and improve the nutritional security,” the Chief Minister told mediapersons after presiding over a meeting of the Odisha Millets Mission.

The Odisha Millets Mission is being implemented as a pilot project in 30 blocks of seven districts. The seven districts where the Mission is being implemented are Malkangiri, Koraput, Rayagada, Gajapati, Kandhamal, Kalahandi and Nuapada. Under the mission, millet cultivation was taken up in 7,444 acres of land across seven districts during kharif 2017-18 and now the Government has a proposal to take this programme to another 55 blocks in four new districts. The farmers will also be incentivised for growing millet.

Official sources said the State Government has decided to scale up funds for the Mission during next five years under which farmers will benefit through direct benefit transfer (DBT). Besides, there is a proposal to include minor millets like little millet (Suan) and foxtail millet (Kangu) under the Integrated Child Development Services (ITDS) and midday meal scheme of the State Government in nine tribal dominated districts covering 26 lakh children. Millets meals will be served as khichdi and upma under ICDS and MDM programme twice a week. Millets will be procured and supplied by Women self help groups and farmer producers’ organisations to ICDS and MDM.

Besides, sale outlets for millet-based products will be opened in 26 locations of Bhubaneswar municipal area to raise awareness regarding millets. The outlets will be operated by non-government organisations (NGOs) from May 1. Various millet products such as halwa, vada, dosa, pakoda, biscuits and cakes will be promoted through this exclusive urban awareness programme. 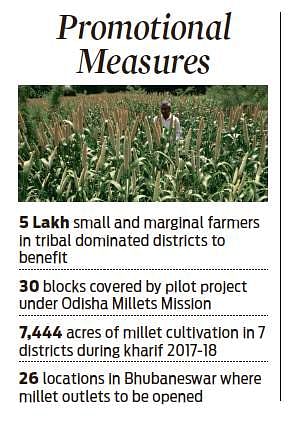 Now we are on Telegram too. Follow us for updates
TAGS
millet millet mission Odisha Naveen Patnaik farming