Elephant menace continues in the interior pockets of Rourkela Forest Division in Sundargarh district as another person was killed in elephant attack on Friday morning.

ROURKELA: Elephant menace continues in the interior pockets of Rourkela Forest Division (RFD) in Sundargarh district as another person was killed in elephant attack on Friday morning taking the total human casualties to nine in the past four months.

The deceased has been identified as Soma Oram (68) of Mandap village under Bisra forest range and the incident took place at about 2 km inside the Khesra revenue forest. 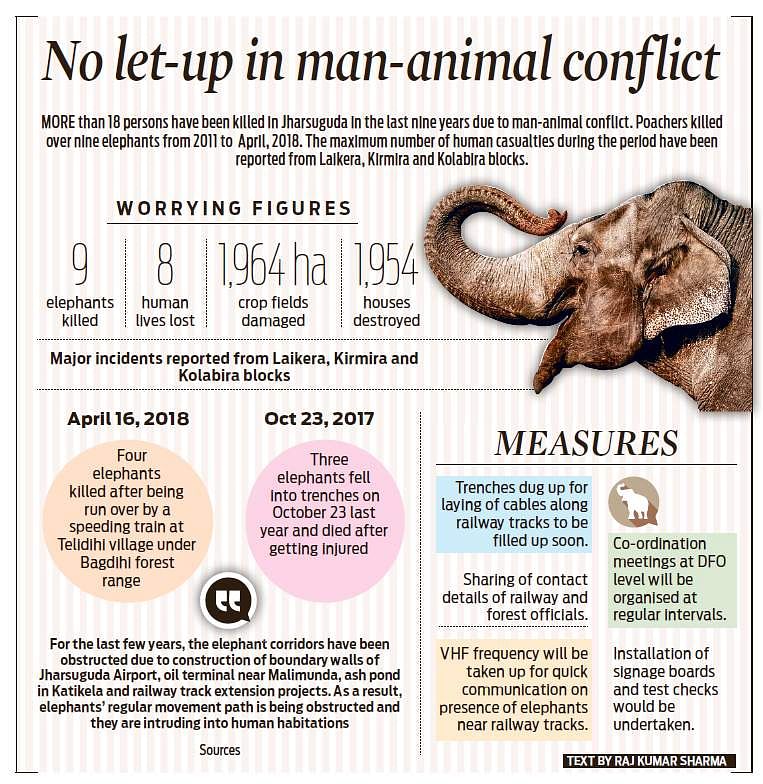 Rourkela Assistant Conservator of Forest (ACF) Dilip Sahu said a herd of six elephants had recently entered Bisra forest range from adjacent Jharkhand and  formed two small groups. On Friday morning, one herd of three elephants moved towards Khesra forest and then went to North Chirubera forest. Oram had gone to Khesra forest to collect ‘datun’ (teeth cleaning twig)  when one of the elephants trampled him to death at about 5.30 am, he added.

Hearing his scream, other villagers and forest guards rushed to the spot and found him dead. After autopsy, the body was handed over to his family and an interim relief of `15,000 was released. A drive has been launched from Friday evening to guide the elephants into deep forest, he added.

On April 26, an elderly villager was killed by a tusker near his house at Lodhobasa village of Rajgangpur forest range. A member of an elephant squad was killed during a drive on February 27 night at Harpali village in Kuanrmudna while another villager was killed at Kadopani village in Birmitrapur forest range on February 9 night. In January alone, five human deaths were reported due to elephant attacks from RFD limits.

Now we are on Telegram too. Follow us for updates
TAGS
Elephant Rourkela Forest Division Sundargarh district