The BPCL bottling plant will be located at Barkhani, about 12 km from Balangir station

Union Minister for Petroleum and Natural Gas Dharmendra Pradhan and Minister for Social Justice and Empowerment Thawar Chand Gehlot are scheduled to lay the foundation stone of the plant on May 21.
Regional LPG Manager (East) Atul Kumar said the plant will be spread over 23 acres and have the capacity to produce 42 lakh cylinders per year. The plant is expected to be operational by March 2020, he informed.

BPCL has 15.37 lakh customers who use around 78 lakh cylinders in a year. The consumption is expected to increase to 105 lakh cylinders by 2020. “The decision to set up the plant at Balangir was taken keeping in mind the growing LPG demand in the State, particularly in Western and South-Western regions.
The location was finalised considering its logistics advantages,” said Head of Infrastructure Task Force (East) Manas Mohanty.

Odisha has four LPG bottling plants, one each at Balasore, Jharsuguda, Khurda and Jatni. With three new plants, including the one at Balangir, being planned by the Oil Marketing Companies, the State will have seven plants having a capacity of 4.06 crore cylinders per annum. Two other plants will be set up at Bhubaneswar and Rayagada.

LPG consumers in Odisha have gone up from 20.22 lakh as on June 1, 2014 to 62.17 lakh on May 1 this year recording a growth of 207.5 per cent. The demand for packed LPG in the State was 454.3 thousand tonne last year and it is expected to be 610 thousand tonne by 2020.Balangir MP Kalikesh Narayan Singh Deo, Leader of Opposition Narasingh Mishra and Patnagarh MLA Kanak Vardhan Singh Deo are also slated to attend the foundation stone laying ceremony. 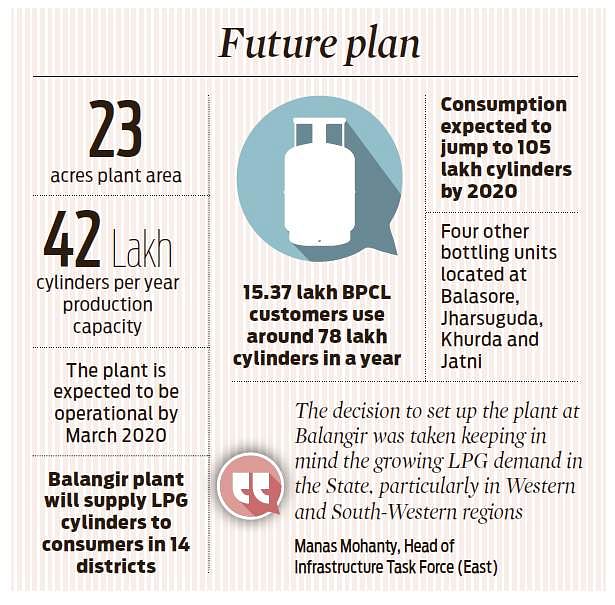