BHUBANESWAR: Two days ahead of the State’s flagship investors’ meet Make-in-Odisha 2018, South Korea has proposed to invest nearly `7 lakh crore in several sectors in coming years. Apart from South Korea, the five-day conclave scheduled to be held from Sunday expects investment promises from five other countries including Japan and Saudi Arabia. Japan is the country partner of the conclave. Encouraged by the Industrial Policy Resolution and conducive atmosphere promised by the Odisha Government, the South Korean Business Association at Kolkata has sent the investment proposal to the State Government.

The business association, having more 200 members from the industry and investors’ community, intends to invest in port, airport, renewable energy, IT, food processing, tourism and hospitality, urban development and solid waste management besides some other sectors which will strengthen the partnership with the State. A delegation of investors led by the association president Jun Rae Cho is slated to meet Secretary of Industries Department Sanjeev Chopra on November 17 and discuss their investment proposals. After the preliminary discussion with senior officials of the Industries Department, the delegation will also meet Chief Minister Naveen Patnaik seeking his support for grounding of the proposed projects.

Business partner of the association in the State, Tzar Aerospace Research Labs (P) Ltd has already set up an aerospace technology start-up to develop a conceptual unmanned hypersonic research aircraft with new computational approaches and methods. Director of the start-up Priyam Mohanty said apart from the economic development, huge job opportunities can be created once the investment proposals are materialised. The first Make-in-Odisha conclave in 2016 had attracted investment intents worth around `3.64 lakh crore. Of 124 MoUs signed during the investors’ meet, nearly 64 per cent are in various stages of implementation.

The State Government is leaving no stone unturned to make the second edition of the biennial global investors’ summit a great success as it has been planned in a grand scale compared to similar events organised by other States. Industries Minister Ananta Das said several business associations have sent investment proposals. “In the run up to the conclave, we had been to South Korea to showcase our potential. A delegation from South Korea is meeting us on Saturday. We are also expecting delegations from Italy, Germany and UAE besides Japan,” he added. 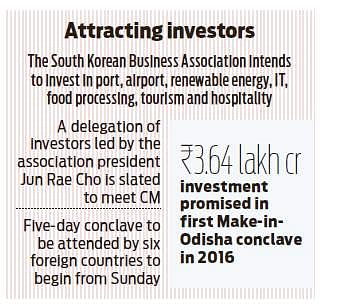