Another major worry for the BJP is that it has failed to leverage the popularity of NDA Government’s flagship programmes in its favour.

BHUBANESWAR: As Odisha heads towards the election year, Chief Minister Naveen Patnaik appears to be firmly saddled in the driver’s seat while the much-hyped Mission 120 of BJP is not gaining traction with the people, a tracker poll on voters’ mood in the State has revealed.

Naveen is heads and shoulders over the Opposition with 51.7 per cent voters rooting for a fifth consecutive term for him, the pre-poll survey conducted by Hyderabad-based political research organisation Peoples Pulse ahead of the 2019 Assembly elections has shown. The BJP’s face Dharmendra Pradhan has 22.8 per cent backers while 15.3 per cent favour Odisha Congress president Niranjan Patnaik for the Chief Minister’s post.

Despite being in power for 18 years, the BJD stewarded by Naveen continues to be untouched by anti-incumbency with overwhelming 41.8 per cent respondents favouring the party while 23.3 per cent backed BJP and 21.9 per cent Congress. Since 2014 polls, the BJD has sustained a marginal drop of 1.6 per percent in its vote share but the BJP has gained a significant 5.3 per cent, largely at the cost of Congress which has lost 3.8 per cent. The BJP’s core voters, the middle class, though are staying with the party with 34.6 per cent preference. 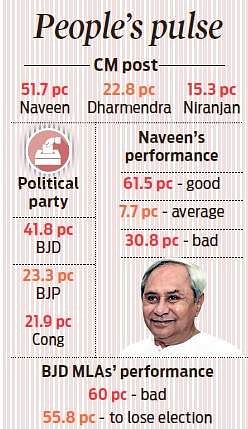 Naveen Patnaik’s performance as the Chief Minister has also got massive thumbs up from the voters with 61.5 per cent of respondents rating it good and 7.7 per cent average while 30.8 per cent rated it bad. Over 43 per cent attribute his clean image and good administration as the main reason for preferring him while 21.6 per cent cited only clean image. Naveen all set for 5th term: Survey

A significant 14.7 per cent also said there was no strong alternative to Naveen in the State.
The tracker poll, first of the three to be released before 2019 Elections, was conducted in mid-September and tried to ascertain the popular mood in the State along with studying the voters’ minds. It consisted of a secret ballot and structured questionnaire. The survey was carried out across 22 Assembly segments comprising 15 per cent of total constituencies, with proper representation in terms of gender, caste, religion, age and occupation.

Research scholars from Political Science Departments of Ravenshaw University Cuttack and Fakir Mohan Senapati University Balasore conducted the fieldwork.The survey reveals that the BJP has not been able to sustain the momentum gained in the panchayat polls last year and has plateaued too early. The Congress, on the other hand, appears to be recovering ground following the appointment of Niranjan Patnaik as OPCC president earlier this year. Over 24 per cent of respondents said the Odisha Congress has gained by his appointment.

Another major worry for the BJP is that it has failed to leverage the popularity of NDA Government’s flagship programmes in its favour. An interesting fact thrown up by the survey is that 46.1 per cent of respondents claimed to have availed the benefits of PM Narendra Modi’s dream project Ujjwala Yojana but a whopping 64.2 percent attribute the scheme to the State Government.

Naveen, however, has his headaches in the form of strong anti-incumbency against his party legislators with nearly 60 per cent rating their MLA’s performance bad and over 55.8 per cent stating that they would lose. Unemployment and price rise are also agitating voters’ minds. Western Odisha is also a problem region with 46 per cent stating that they have been discriminated against by the Naveen Patnaik Government.On the national front, though, Prime Minister Narendra Modi continues to be at the top with 49.7 per cent in his favour as against 31.7 per cent backing Rahul Gandhi.

Stay up to date on all the latest Odisha news with The New Indian Express App. Download now
TAGS
NDA government Naveen Patnaik