The prestigious Sambalpur Assembly constituency is going to witness a direct fight between a teacher Raseswari Panigrahi and her student Aswini Pujahari, both doctors.

SAMBALPUR: The prestigious Sambalpur Assembly constituency is going to witness a direct fight between a teacher Raseswari Panigrahi and her student Aswini Pujahari, both doctors.
While Raseswari is the BJD candidate, Aswini will fight the polls with Congress ticket. Sambalpur goes to polls in the third phase on April 23 .

Raseswari was the teacher of Aswini while he was pursuing MBBS course at Veer Surendra Sai (VSS) Medical College at Burla, which was subsequently upgraded as VSS Institute of Medical Sciences and Research (VIMSAR). 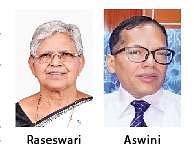 While Raseswari, who is a popular gynaecologist here, had served as the Head of Obstetrics and Gynaecology department of VSS Medical College and Hospital, Aswini, who is a gastroenterologist, was the Director of VIMSAR.

Aswini, who courted controversy over his alleged unethical medical practices in VIMSAR, resigned from his post in February this year. He joined Congress on March 25 and the party fielded him from Sambalpur Assembly.

Sambalpur Assembly segment is a completely urban seat and a major portion of Sambalpur Municipal Corporation, including Burla and Hirakud, comes under it. Currently, the segment is being represented by Raseswari. Although she was a ‘parachute candidate’ during the 2014 polls, Raseswari managed to grab the segment after defeating senior BJP leader and former minister Jayanarayan Mishra by a margin of 9,958 votes.

This is not the first time a teacher and student are engaged in poll battle in Sambalpur.
In 1957, eminent academician Sraddhakar Supkar of Ganatantra Parishad had fought against his teacher Ghanashyam Dash of Congress from Sambalpur Parliamentary constituency.

Ghanashyam, who is the maternal grandfather of BJP candidate for Kendrapara Lok Sabha seat Baijayant Panda, was the teacher of Sraddhakar in the erstwhile Ravenshaw College. Sraddhakar was elected from Sambalpur parliamentary constituency in that election.