Stakes are high for both sitting MP Balabhadra Majhi and BJD candidate Ramesh Majhi in the Nabarangpur Lok Sabha constituency.

NABARANGPUR: Stakes are high for both sitting MP Balabhadra Majhi and BJD candidate Ramesh Majhi in the Nabarangpur Lok Sabha constituency.Balabhadra who quit BJD after being denied renomination by the ruling party has now to prove his mettle in retaining his seat but from BJP. Along with his performance as MP, he is banking on the Modi wave to sway voters in his favour. 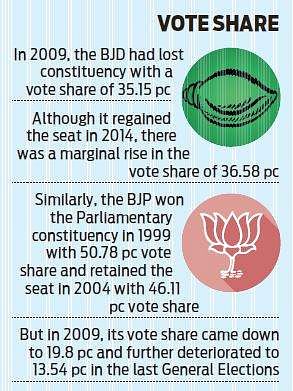 He is also  eyeing the Bengali vote bank which will be the most important deciding factor in the Parliamentary constituency. Around one lakh voters of the  community reside in Nabarangpur and Malkangiri. If sources are to be believed, Bengalis are tilted towards the BJP and Modi this time. On the other hand, a three-time MLA, the soft-spoken Ramesh enjoys good support in his Assembly segment - Jharigam. However, he is little known in other parts  of the constituency.

With two days to go for the first phase elections, Ramesh is meeting voters with KALIA and the clean image of Naveen Patnaik as his poll planks. With almost 90 per cent of the population in the constituency comprising farmers, the KALIA scheme is expected to yield electoral rewards. However, implementation of the scheme is emerging a major headache for the party.

It is alleged that only five to 10 pc of the farmer population has received KALIA  benefits and those deprived of it may vote against the BJD which will affect Ramesh’s prospects. Recently, Chief Minister Naveen Patnaik while  campaigning in the constituency had assured that his Government will transfer `10,000 under KALIA scheme to left out farmers on the day his party  forms the Government.

The BJP and Congress are describing the scheme as a tool to get election gains. BJP leader Dharmendra Pradhan  had said the BJD has cheated innocent farmers in the name of KALIA. Similar allegations have been made by Congress candidates as well.

Unfulfilled promises of the BJD are also posing challenges. The ruling party had promised to take over a private college in Nabarangpur and  Malkangiri which has not happened so far.

Most importantly, irrigation projects like Turi-Guntat Medium Irrigation Project, Lower Bhaskel Medium  Irrigation Project and Tel Integrated Project are yet to be implemented. Naveen had laid foundation stone for a project which was planned to provide irrigation from Indravati reservoir few years ago. But it is yet to see light of the day.