Gudikhola villagers ready to vote both in Odisha and AP today

Gudikhola is located near Mahendratanaya project under Buratal panchayat of Odisha but to reach the village, one has to cross Budarsing panchayat in Srikakulam district.

BERHAMPUR: THIS might sound strange but voters in Gudikhola on Odisha-Andhra Pradesh border may well vote twice across both the States on Thursday.

Although illegal, the voters are getting ready to vote for two Lok Sabha constituencies and as many Assembly segments in both Odisha and Andhra Pradesh. The village shares its border with Ganjam and Gajapati districts in Odisha and Srikakulam district in Andhra Pradesh and thus for the candidates in the constituencies concerned, this dual vote bank is a bonanza. 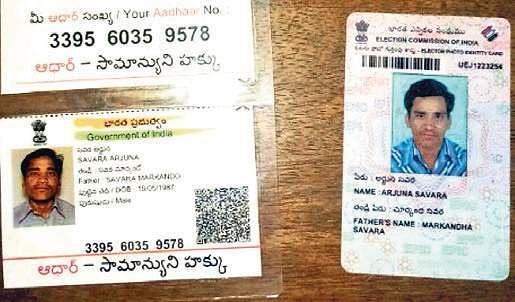 They had been carrying out this practice in earlier elections too. While they have voted twice in Andhra Pradesh and Odisha in the past General Elections, this time the situation is different as the polling date in both the States is April 11. But villagers are willing to go that extra mile to exercise their franchise again.

“The polling booths of both the States are not very far from each other. In the past, we used to put the election ink on index finger of right hand for Odisha and left hand for Andhra Pradesh but then, the elections were at least seven days apart in the two States. We never faced any problem or objections by the polling officials during voting”, claimed Arjun Sabara, a 32-year-old resident of the village that comes under Buratal panchayat in Patrapur block of Chikiti Assembly segment.

Showing his voter ID cards of both Odisha and Andhra Pradesh, Arjun says this time he has got the opportunity to vote for two Lok Sabha and two Assembly segments but instead of any political party, he would vote for the leader who has worked for these bordering villages in the past.

Gudikhola is not the only village where dual voting has been practised in the past. There are three other villages, including Babanashi, Kuladi and Satapura under Tumba panchayat in Patrapur block where people vote for both Odisha and Andhra Pradesh candidates. Villagers of Babanasahi, Kuladi and Satapura can cast their votes in Puriasahi booth in Odisha or Sanakrishna booth in Andhra Pradesh.

Since these dual votes are important to candidates in both the States, they are leaving no stone unturned to ensure that the voters exercise their franchise twice. The candidates have arranged vehicles to ferry the voters to the polling booths and drop them back home. Voters, unaware of the fact that dual voting is electoral fraud, have decided to vote in Andhra Pradesh in the morning and Odisha in the noon.

Election officials overseeing the process in bordering villages are unaware of the dual voting practice and said bona fide voters with identity proof can vote either in Odisha or Andhra Pradesh.Sub-Collector of Berhampur Digant Routray said dual voting is an offence and the matter would be taken up with his Andhra Pradesh counterpart. Ganjam ADM Laxmidhar Sethy also said he would take up the matter with officials concerned in the neighbouring State.

Since these dual votes are important to candidates in both the States, they are leaving no stone unturned to ensure that the voters exercise their franchise
All the candidates in fray have arranged vehicles to ferry the voters to the polling booths and drop them back home