The political landscape of Jagatsinghpur continues to remain a stronghold of dynasties, if one goes by the current lot of candidates fielded by parties in the poll arena.

JAGATSINGHPUR: The political landscape of Jagatsinghpur continues to remain a stronghold of dynasties if one goes by a current lot of candidates fielded by parties in the poll arena. Incumbent MLA Chiranjib Biswal, who is the Congress candidate for Jagatsinghpur Assembly seat, is the son of former deputy Chief Minister late Basant Kumar Biswal. 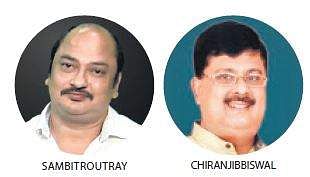 Similarly, Congress candidate for Balikuda-Erasama seat Lalatendu Mohapatra is the son of former minister Basudev Mohapatra. Basudev had won from Balikuda in 1971, 1974 and 1980 elections. Like Basant, former veteran Congress leader late Laxman Mallick’s son and daughter have been fielded by the grand old party in the elections. Son Devi Prasad Mallick is contesting for Tirtol Assembly seat while daughter Pratima Mallick is the Lok Sabha candidate for Jagatsinghpur constituency. Laxman was an MP in 1980 and 1984 and had also held important portfolios in the State Cabinet.

Congress made Devi its candidate for Tirtol after former MP Bibhu Prasad Tarai joined BJP. Bibhu, who had been nominated by Congress for Tirtol, was dissatisfied with the party’s decision to field him from the seat. After joining BJP, he has been made the Lok Sabha candidate for Jagatsinghpur by the saffron party. Pratima had unsuccessfully contested the 2009 elections as an Independent from Tirtol seat.

Dynasty politics, which was limited to Congress only, has become a key feature of other parties too in the district. BJD candidate for Balikuda-Erasama Assembly seat Raghunandan Das is the son of veteran Congress leader Bipin Bihari Das. Bipin had represented Balikuda in 1961. Raghunandan had contested the 2014 elections as an Independent but lost.

Similarly, Paradip MLA Damodar Rout is the BJP candidate for Balikuda-Erasama seat while his son Sambit Routray is contesting as the BJD nominee in Paradip. After being expelled from BJD for alleged anti-party activities, Dama joined BJP while his son remained in the ruling party. After the senior was made a candidate by the saffron party in the neighbouring Balikuda-Erasama seat, BJD nominated Sambit from Paradip to fill in his father’s shoes.