He was the sole earning member of a family of six. The 45-yearold man died in a private hospital due to a brain stroke in Cuttack. His body was brought to Ranitola.

JAGATSINGHPUR:  Jumping into opportunities and cashing in on them is what politicians must be good at. Though a newcomer in the world of politics, BJD candidate for Paradip Assembly segment Sambit Routray seems to have learnt the tricks of the trade. On Sunday, Sambit set an example for others by helping to carry the body of one Mohan Mohapatra of Ranitola village under Tirtol police limits to the cremation ground. Mohapatra was working as a driver and led a life of penury. 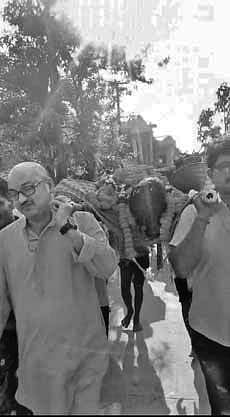 He was the sole earning member of a family of six. The 45-yearold man died in a private hospital due to a brain stroke in Cuttack. His body was brought to Ranitola. As soon as Sambit heard of the incident, he rushed to the deceased’s house and helped carry his body to the cremation ground. He also ensured that the man was given a decent funeral. Sambit was accompanied by Mohapatra’s son, brother and a friend. The deceased’s wife Manorama said it would be tough for the family to survive with its sole earning member no more. She said Sambit’s assistance and gesture gave the family the much-needed moral strength to overcome the grief.

Ironically, Mohapatra’s family are supporters of the Congress. Sarpanch of Porgadeipur gram panchayat Sunita Samantaray said Routray called the local BJD leaders to make arrangements for the funeral and the last rites of the deceased were conducted as per rituals.