Elections were held to Bargarh, Sundargarh, Balangir, Kandhamal and Aska Parliamentary constituencies and 35 Assembly segments under them.The average polling percentage of these five Lok Sabha seats in the second phase is also marginally higher compared to 2014 in which the average polling in these seats was 72.47 pc.

Election Commission officials said preparation of final tally for the second phase was slightly delayed as information from many of the sensitive polling stations in these constituencies where voting continued after 6 pm could not reach on time.

However, if statistics of last General Elections is taken into consideration, voter turnout in Bargarh, Sundargarh, Balangir and Kandhamal Lok Sabha constituencies in this election was comparatively lower.

In 2014, around 78.71 pc voters had exercised their franchise in Bargarh Lok Sabha constituency, while 71.66 pc voters had cast votes in Sundargarh constituency. Balangir and Kandhamal Parliamentary constituencies had recorded a voter turnout of 74.92 pc and 73.43 pc respectively.

Aska is the only constituency in the second phase where polling percentage slightly improved in comparison to 2014. Voter turnout in the constituency this time is three pc more compared to 2014 when it was 63.63 pc.

The average polling during second phase is also lower compared to the first phase during which, the State  recorded a total 73.76 pc voter turnout in four Lok Sabha and 28 Assembly constituencies on April 11.
The total number of voters in second phase was 76.93 lakh. Voting at many polling booths was disrupted due to glitches in EVMs. 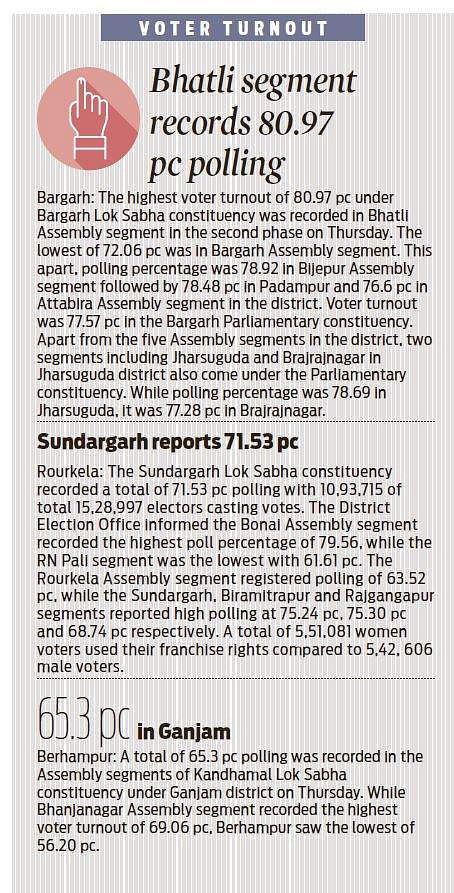