During interrogation, the accused had confessed that they were transporting those for sale at Kochilanuagan village.

CUTTACK: Cracking down on illegal firearms trade flourishing in and around the locality, Choudwar police on Friday claimed to have busted a gunrunning racket with arrest of two persons.

The arrested are Ramesh Sahoo alias Baina (32) of Oltapur and Bharat Hembram (29) of Dandapadia village under Gurudijhatia police limits. Police seized a country-made pistol, a muzzle loaded single barrel rifle and five ammunition from their possession. 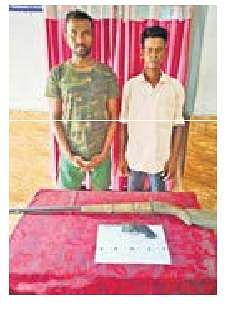 DCP Akhilesvar Singh said acting on a tip off that the accused were transporting firearms on Thursday evening, a team of Choudwar police station on evening patrol cornered them near Ramachandrapur and seized the firearms and ammunition.

During interrogation, the accused had confessed that they were transporting those for sale at Kochilanuagan village, Singh said.

Investigation is on to ascertain the source from where pistol, rifle and ammunition were procured and the persons to whom they would have sold the same, the DCP informed.

Now we are on Telegram too. Follow us for updates
TAGS
Odisha