Despite widespread distress sale, crop-loss caused by truant weather triggering farmer suicide, he State has been reporting bumper harvest of paddy which is followed by rising procurement.

BHUBANESWAR: In Odisha, paddy comes with a problem of plenty. Come drought or flood, the State has been reporting bumper harvest of paddy which is followed by rising procurement by the Government.

Yet, there is widespread distress sale, crop-loss caused by truant weather triggering farmer suicide induced by rising cost of production and agricultural indebtedness. In fact, there is too much paddy everywhere - with farmers, millers and even with the Government which procures it. Paradoxical as it may seem, paddy production of the State is on the rise but the area under cultivation is gradually declining because farmers are shying away as it increasingly becomes non-remunerative.

Numbers don’t lie. The declining interest of farmers from agriculture is evident from the fact that the area under cultivation is progressively shrinking. The net sown area of the State for all the crops was 58.29 lakh hectare in 2000-01 which reduced to 53.56 lakh hectare in 2017-18.

A recipient of Krishi Karman Award four times - including three consecutive years from 2012-13 to 2014-15 for being the best State in overall food grains production - not a single year has passed without political parties raising the bogey of distress sale despite the fact that the State has been procuring paddy much more than what the farmers produce. So, where is so ‘much’ paddy coming from in Odisha?

Sample this. The State had a bumper harvest of paddy of 149.16 lakh tonne (rice equivalent of 101 lakh tonne) in 2014-15, according to Agriculture Department estimates. The Food Supplies and Consumer Welfare Department put the total rice production at 98.45 lakh tonne with a marketable surplus of 33.97 lakh tonne after meeting the requirement towards feed and seed.

When the Food and Procurement Policy for kharif marketing season (KMS) 2014-15 was announced, the Government targeted to procure 30 lakh tonne of rice keeping the option open for District Collectors to revise the numbers if they felt necessary. The actual procurement of rice that year was 35.46 lakh tonne which is nearly 1.5 lakh tonne more than the marketable surplus.

The next year, keeping in view possible crop damage due to scanty rainfall in the State, the Government fixed a procurement target of 30 lakh tonne of rice for 2015-16 kharif season. The target was subsequently reduced by around 5.5 lakh tonne basing on Agriculture Department’s forecast of less production due to rainfall deficit.

As expected, rice production dropped to 58.75 lakh tonne, a steep fall of around 40 lakh tonne from 2014-15 as 23 out of 30 districts experienced a drought like situation. A concerned State Government pitched in for a demand for special Central assistance of Rs 3,000 crore to mitigate the dry-spell situation that resulted in crop loss in about 5.23 lakh hectare.

Baffling as it may sound, in a drought year having rice deficit of about 6.58 lakh tonne after meeting its requirement (see graphics), the State could procure 34.43 lakh tonne rice. As political leaders across party lines made a hue and cry over crop loss, the Government released an interim assistance of Rs 1,000 crore before raising its demand for a special package for the drought-hit State.

The big question is, where did all the rice come from? Was it grown by the farmers? Or was it produced on paper only? A politically sensitive issue, no one dares question where did the marketing surplus paddy come amidst huge crop loss that led to increasing number of farmers’ suicides.Though the Central Government questioned the duplicity of the State Government by ignoring the special package demand at first, it subsequently reimbursed the rice procurement bill of the State under the decentralised procurement system ostensibly under political consideration. 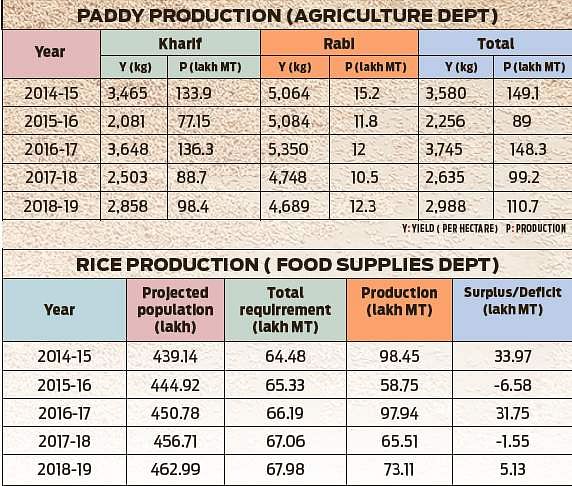 The year 2015 was a ‘black year’ for farming community in the State as it reported maximum number of farmer suicides. On October 29, 2015, Odisha’s Special Relief Commissioner informed that the Government had received 41 reports of farmer suicides but refused to recognise crop failure as trigger for these extreme steps taken by the hapless farmers.An inquiry into the suicides blamed it on “mainly family disputes” and even “excessive liquor consumption” behind the deaths and the Government even refused to see its own failure.

By mid-March 2016, the official number of farmer suicides since the kharif season of 2015 had gone past 170. However, the Government continued to insist that none of the suicide was linked to crop-loss and attributed them to illness, heart attack, mental disturbance, drug addiction and family quarrel.

As farmers’ suicides continued unabated, the State recorded yet another bumper crop in 2016-17 kharif season with a rice production of 97.94 lakh tonne. The 2017-18 kharif marketing season witnessed a situation similar to 2015-16 reporting huge crop loss due to combination of natural calamities, including drought, unseasonal rains and pest attack. The extent of crop damage could be gauged from the crop loss claims of Rs1,625 crore settled by insurance companies to 18.99 lakh farmers under Pradhan Mantri Fasal Bima Yojana (PMFBY).

Even after recording a deficit production of about 1.55 lakh tonne (total rice production 65.51 lakh tonne against the total requirement 67.06 lakh tonne), the State Government procured 49 lakh tonnes of paddy (rice equivalent of 33.32 lakh tonne). Well, who produced all this paddy again? There is no answer to it.

The 2018-19 kharif season has been no different either. As per advance estimates of the Food Supplies and Consumer Welfare Department, marketable surplus of rice will be stand at 5.13 lakh tonne after meeting the consumption and seeds requirement of 67.98 lakh tonne. And, defying logic, the State Government’s paddy procurement by June 2019 end crossed 65 lakh tonne (rice equivalent of 44 lakh tonne) against the annual target of 55 lakh tonne. The farmers, clearly, are not impressed. In Kalahandi, farmers took to streets staging blockades on National Highways urging the Government to purchase their surplus paddy stocks.

Faced with a ballooning expenditure (Rs 11,375 crore at the rate of Rs 1,750 per quintal) on paddy procurement and acute shortage of storage capacity, the Government had to backtrack from its pronouncement of purchasing all surplus paddy coming to the mandis (paddy procurement centres).
In the Budget Session of the Assembly, when the matter came in for heated debate by Opposition BJP and Congress, Agriculture Minister Arun Sahoo had a tough time defending the Government when he said 10 lakh tonne paddy above the target fixed had been procured and there is no surplus paddy with the farmers.

How can the State procure 47 quintal when the average paddy production is about 30 quintals? This makes little sense. Barring a few farmers from Western Odisha districts of Kalahandi and Bargarh - considered to be the rice bowl of the State, average paddy production (per acre) in irrigated area stands at about 18 quintal and less than 10 quintal in non-irrigated land.

Biswanth Panda, a farmer of Kalahandi district with 10 acre of land says he produced about 250 quintal paddy during last kharif. The rabi production was, however, 30 quintal per acre. That is primarily because productivity goes to 28-30 quintal under Systematic Rice Intensification (SRI) system under which transplantation is made in lines. However, the cost of production jumps under SRI method.

Senior Congress leader Narasingh Mishra differs with the Government estimate on yield per acre on the ground that production has gone up with farm mechanisation, increasing rate of seed replacement with the use of more and more high yielding variety of seeds and better soil management.

Claiming that rice production has increased to over 40 quintal in irrigated areas and 30 quintal in non-irrigated areas using SRI method, he says, the per acre limit for procurement set by the Government is too small. “This is the prime reason of distress sale of paddy,” the Congress veteran says.

Mishra, who headed the departmentally-related standing committee on Food Supplies and Consumer Welfare and Cooperation Department, had recommended the Government to do away with the limit imposed for procurement to enable farmers sell their harvest to enhance their economic strength.

People familiar with the paddy procurement business say actual procurement is very less compared to what is revealed on records. The age-old practice of ‘paper transaction’ is very much in the trade and it is an open secret.“With big money involved in the trade, it is very difficult to break the nexus between officials of the Food Supplies and Consumer Welfare Department, Food Corporation of India and rice millers,” asserts senior BJP leader and former MLA from Padmpur Pradip Purohit.

Purohit, who belongs to a district which produces maximum paddy in the State, points to Palsada Primary Agriculture Cooperative Society under Pikamal block of Bargarh district which is under investigation for procuring 10,000 quintal of rabi paddy from farmers who are either non-existent or have not transacted any business at all.

This is only the tip of an iceberg. A thorough investigation can only reveal the real picture about actual transaction taken place. Despite Paddy Procurement Automation System (P-PAS), a IT initiative to bring transparency in paddy procurement, the BJP leader says there exists a ‘nexus’ which the entire administration is aware of since everyone has a share in the pie.

The actual production of paddy in a particular KMS is much less than average production projected by Agriculture Department. The gap in the projected and actual production is adjusted by pumping paddy into the system by a section of rice millers who already have huge stock at their disposal. Since the number of small and marginal farmers is large and they have hardly any surplus paddy to sell, their accounts in the cooperative banks are used under P-PAS system for the illicit transaction of funds.

As paddy is procured only from farmers who have registered with PACS and the cost of paddy sold is directly sent to their accounts, these gullible farmers offer assistance to officials and rice millers involved in the illegal trade by allowing them to transact through their accounts with a cost.

Sources say, the prevailing rate for using the account of a farmer is Rs 10 per quintal. Once proceeds of the paddy sold are transferred to accounts these farmers, they withdraw the money and share it with rice millers who are willing to be a part. Officials who are hand-in-glove get their share from these millers, said an insider of the trade.

Stay up to date on all the latest Odisha news
Now we are on Telegram too. Follow us for updates
TAGS
Odisha paddy farmers Odisha farers crisis Odisha farmers data