Project Director of DRIP in Central Water Commission (CWC) Pramod Narayan said work on 100 of the 223 dams has been completed, the rest will be over by end of June 2020.

BHUBANESWAR: Upgradation and restoration of dams taken up under the ambitious Dam Rehabilitation and Improvement Project (DRIP) in seven States is likely to be completed in the next one year.With 5,254 large dams in operation, India ranks third globally. As many as 223 dams in Kerala, Madhya Pradesh, Odisha, Tamil Nadu, Karnataka, Jharkhand and Uttarakhand are being repaired and restored in the first phase.

Project Director of DRIP in Central Water Commission (CWC) Pramod Narayan said work on 100 of the 223 dams has been completed, the rest will be over by end of June 2020.“Started in April 2012, the project took up restoration of 26 dams in Odisha. Almost 90 per cent works of the dams have been completed, except Hirakud which will take three more years as the State Government is building an additional spillway,” Narayan told ‘The Express’.

With an estimated cost of Rs 370 crore funded by the World Bank, the additional spillway is being constructed at Hirakud reservoir to reduce the pressure and allow more flow of flood water. Focus has been laid on structural and non-structural measures of all 223 dams, some of which are more than 100 years old, during the repair and restoration drive. Since there was no budgetary provision by any State or Central Government for repair and maintenance of dams, CWC launched the WB-funded project.

The Centre has approved the revised cost of DRIP amounting to Rs 3,466 crore along with two years extension of the project which was initially scheduled to be completed in April 2018.“At least 25 activities, including treatment of leakage, reduction of seepage, improvement in dam drainage, spillways, ability to withstand higher floods, head regulators, draw-off gates and their operating mechanisms, stilling basins and downstream spillway channels have been undertaken besides safety and provisioning of additional flood handling facilities,” Narayan said.

The country witnessed three unprecedented floods in the last five years, including the devastating Chennai and Kerala floods, which led to debates on dam safety management and operational protocols.

“The newly-formulated Dam Safety Bill 2018 addresses issues related to safety and management of dams. The DRIP has introduced first-of-its-kind operational protocols on a large scale in a single process,” Narayan added.

The second phase of the project is expected to begin from April 2020 and it would take up rehabilitation of 733 dams from 18 States at an estimated cost of Rs 11,487 crore. 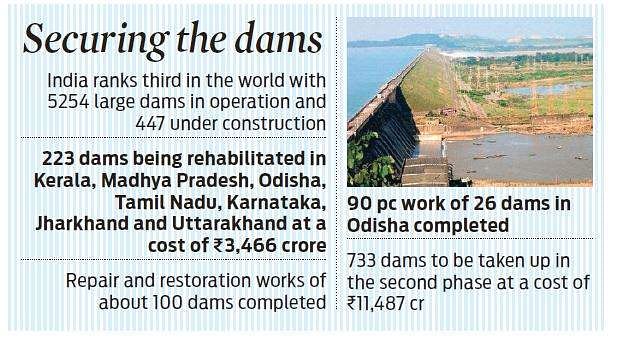