Despite the implementation of the Orissa Prevention of Witch Hunting, Act, 2013, that entails penalty for practising and abetting sorcery, as many as 20 persons have been killed in Odisha's Rayagada.

RAYAGADA: Sorcery-related incidents have claimed more lives in remote villages of Rayagada district than any epidemic in the last nine years.

Despite the implementation of the Orissa Prevention of Witch Hunting, Act, 2013, that entails penalty and punishment for practising and abetting sorcery, as many as 20 persons have been killed in the district during the period

This year, 14 persons of the district were sentenced to life imprisonment for killing a man on suspicion of sorcery.  The victim Dekhina Tadingi of Chanchara Durgum village was killed by a group from the same village on November 18, 2017.

In most of the cases, the victims are either hacked to death or burnt alive.

Rayagada tops the list of districts in the State in sorcery-related violence. Neither the witchcraft prevention law or fear of police action has been a deterrent in stopping the social evil. Of the 20 killings in nine years, seven were women. 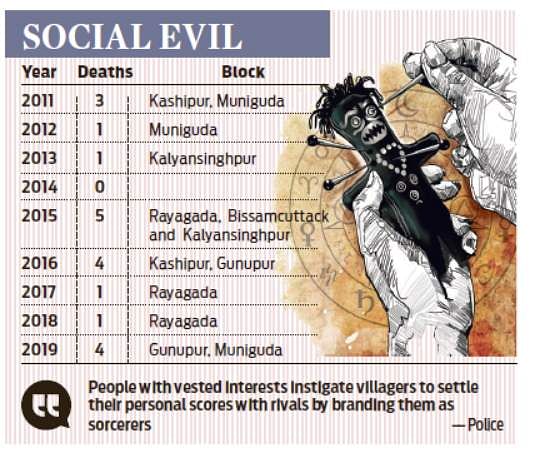 This year, three sorcery-related deaths have been reported from Gunupur block and one from Muniguda. According to police reports, one case each was recorded in 2018 and 2017 in Rayagada block. In 2016, four persons were killed in Kashipur and Gunupur block on the allegations of practising sorcery. The number of deaths was five in 2015.

There are many more such cases which go unreported as the incidents are suppressed at the village level, sources said.

Police said investigations have revealed that people with vested interests instigate villagers to settle their personal scores with rivals by branding them as sorcerers.

Apart from lack of awareness, ailing healthcare is also a major contributor to sorcery-related violence in the district.

Rayagada district is prone to malaria, dengue, diarrhoea and other water and vector-borne diseases.

Usually, when a person is ailing for a long time or succumbs to any disease, villagers suspect it to be a case of sorcery. Instead of doctors, villagers resort to witch doctors who name a particular person and accuse him of practising sorcery.

As many as 586 villages in the district are located in difficult terrains and do not have road connectivity. Although the district administration is providing stretchers to villagers to carry patients to nearest health centres, people prefer quacks and witch doctors.