Come December 1, vehicle owners in Odisha will have to face two stricter rules.

BHUBANESWAR:  Come December 1, vehicle owners in Odisha will have to face two stricter rules. Along with enforcement of new traffic rules, collection of toll through FASTags will also be mandatory on National Highways.

Though the State Government relaxed the new traffic rules for three months to allow people get their documents ready, Ministry of Road Transport and Highways has made it clear that vehicles will have to pay double the toll amount if they pass through FASTag lanes on NH without electronic tag.

With only seven days left for the rule to be implemented across toll plazas, the National Highways Authority of India (NHAI) has urged all vehicle owners to obtain FASTags from the toll plazas or designated banks and online platforms like Paytm and Amazon.

FASTag is an electronic device that works on radio frequency identification technology for making toll payment directly from the prepaid account linked to it. The tag is affixed on the windscreen of vehicle and it ensures that the toll is collected once the vehicle pass through the FASTag lane of toll plaza. 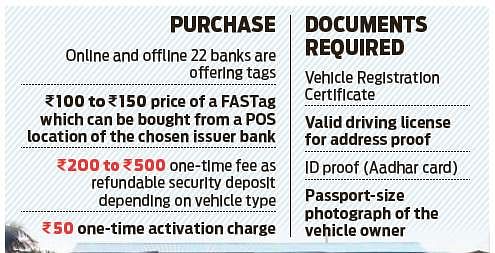 “NHAI is offering the tags to vehicle owners free of cost till December 1. It has a validity of five years and one needs to recharge it as per the requirement after purchase. The minimum balance should be Rs 200,” he said.

Odisha has 12 toll plazas of which five have already been equipped with devices that would read the FASTags for electronic collection of toll. While six plazas are partly equipped, not a single device has been fixed at one plaza.

Panda said trial runs are on at the toll gates at Sergarh, Gurapalli, Manguli, Pipili and Bargarh where all lanes are ready for FASTag operation. Three plazas at Gudipada, Panikoili and Srirampur will be ready by Sunday and three other gates at Banajodi, Hasanpur and Khantaghar have been asked to complete device set up by November 28, he said.

While the tags are supplied by Indian Highways Management Company Limited (IHMCL), people alleged shortage of tags at some toll plazas.

Panda said the company has already been informed about the situation and the tags will be available by Monday.

Toll plazas are also getting ready for the electronic toll collection. In-charge of Manguli Toll Plaza Pravat Kumar Lenka said, of total 10 lanes on both sides, four each are equipped with devices and one each lane has been kept open for collection of toll through both FASTag and cash.

“We are making people aware about the new method through leaflets and encouraging them to collect the tag from the counters opened by banks at the plaza,” he said.

Commerce and Transport Secretary G Srinivas said a meeting has been convened next week for discussion on smooth roll-out of the programme in the State. He assured that he will take up with the NHAI to resolve the issue of shortage of tags.