BHUBANESWAR: With all attention centred on Covid-19 management, prevention and control of malaria seems to have taken a back seat in Odisha. Malaria cases have risen significantly in some of the high burden districts which had been witnessing a steady decline in cases.

As per the latest statistics, till October this year, the State recorded 37,652 cases as against 33,207 reported till October in 2019 with a rise of 13.39 per cent (pc). The number of deaths also went up to eight instead of five during the same period last year.

The more deadly plasmodium falciparum parasite contributed to over 91.5 pc (34,450) of the cases as against 90 pc last year. What has emerged as a concern is that Kalahandi, Kandhamal, Rayagada and Malkangiri among the nine districts where the targeted interventions were adopted, have recorded more cases than that of last year. 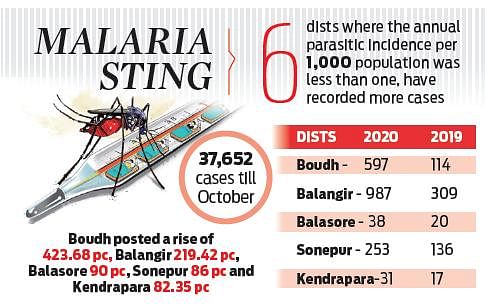 “The cases rose in some of the districts due to disruption in distribution of long-lasting insecticidal nets (LLINs) and awareness drives in the remote areas due to the prolonged lockdown following the coronavirus outbreak. The activities have been intensified and we hope the situation will improve in the remaining months of this financial year,” said a senior health official.

There is, however, a silver lining as six high burden districts, Khurda, Koraput, Ganjam, Gajapati, Nabarangpur and Sundargarh have witnessed a decline despite the unavoidable circumstances.

Now we are on Telegram too. Follow us for updates
TAGS
Odisha malaria Coronavirus COVID 19