Shut since March after the coronavirus outbreak, the Sri Jagannath Temple in Puri is set to finally reopen on December 23.

BHUBANESWAR:  Shut since March after the coronavirus outbreak, the Sri Jagannath Temple in Puri is set to finally reopen on December 23. Following a meeting of the Chhatisha Nijog on Saturday, the temple administration decided to send a proposal to State government next week recommending the re-opening of the 12th century shrine. The temple may open its doors on December 23, but entry of devotees will be allowed in a graded manner.

The administration has chalked out a plan for resumption of darshan of the deities with only residents of Puri to be allowed into the temple till December 31. From December 31 night to January 2, the temple would remain closed for devotees in view of the heavy rush of devotees on the new year eve. Devotees from outside Puri will have to wait until January 3 to get entry into the temple. However, only 5,000 persons will be allowed per day during the initial week.

Basing on the experience, the number will be gradually increased over the subsequent weeks. Further, devotees willing to enter the temple will have to produce Covid-19 negative reports of tests done in the last 48 hours. Both RAT and RT-PCR tests will be allowed. “Basing on Chhatisha Nijog recommendations, we will send the proposal to the State Government in next two to three days. After we receive approval, it will take five-six days to prepare for the reopening,” Chief Administrator of Sri Jagannath Temple Administration (SJTA) Dr. Krishan Kumar said.

The temple administration maintained that the Covid scenario would have to be borne in mind all the while and precautionary measures would be a priority. Face masks and sanitisers would be mandatory for 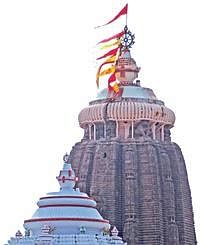 devotees. There will be strict regulation on bringing any offerings like flower or diyas. A detailed SOP will be chalked out and presented to the government, Dr Kumar said.

The SJTA expressed its gratitude to the residents of the holy town for their cooperation when the shrine was closed and also in making the world-famous Rath Yatra a success without crowds. Residents as well as servitors expressed their happiness over the exclusive privilege extended by the temple administration to the local devotees. Padma Devi, a local devotee who takes breakfast after witnessing Mangala Alati, said, “At last Kalia listened to my prayers.” The temple servitors also were elated stating that they will finally have an income which had been completely lost due to the shutdown.