Police rescued the 21-year-old girl, who was allegedly abducted by a Muslim youth, on Thursday night. The girl was allegedly kept in captivity in Jagatpur area of Cuttack district.

JAJPUR: Police rescued the 21-year-old girl, who was allegedly abducted by a Muslim youth, on Thursday night. The girl was allegedly kept in captivity in Jagatpur area of Cuttack district. Police also nabbed the accused youth, identified as Shaikh Abdul Sehmat Khan alias Bobby of Choramuhan village. Sub-divisional police officer of Jajpur Road Chinmaya Kumar Nayak said both the accused and victim were being brought to Dharmasala police station. 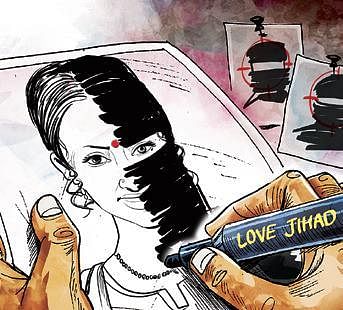 On Wednesday, the girl’s father had lodged a complaint against Bobby for kidnapping his daughter and alleged it to be a case of ‘Love Jihad’.  Earlier on the day, police had arrested Bobby’s father Shaikh Abdul Hamid Khan for his alleged involvement in the abduction and threatening the girl’s parents of dire consequences. He was produced in the local court which remanded him in judicial custody for 14 days.

Besides, an audio clip of the girl claiming torture by her abductor had gone viral on the day. In a recorded telephonic conversation with her mother, the victim from Chahata in Jajpur district was heard alleging that she has been confined by her kidnapper in a hotel room near Puri sea beach for the last two days. She informed that the abductor is planning to take her to a mosque in Cuttack for marriage.

“My abductor is shifting me from one place to another. Now we are in a hotel near the beach in Puri. I am confined to the room for the last two days. He is torturing me and my life is in danger,” the girl was heard telling her mother in the audio.

The victim further said she will be taken to a mosque at Sutahat in Cuttack for marriage. “They would change my religion in the mosque before marriage,” the girl said and prayed her family members to rescue her from the kidnapper’s clutches immediately.

In his complaint to the Jajpur SP on Wednesday, the girl’s father had stated that his daughter had gone to collect her migration certificate from Vyasa Nagar Autonomous College at Jajpur Road on December 5. However, she did not return home in the evening and her mobile phone was switched off. He alleged that Bobby had earlier made several attempts to kidnap and marry his daughter by changing her religion.

Now we are on Telegram too. Follow us for updates
TAGS
Odisha abduction case Odisha Love Jihad case