BERHAMPUR: Two random criminals meet in jail, become friends and hatch plan to loot jewellery shops. This may seem straight out of a heist flick but Berhampur police has nabbed two such robbers of Chhattisgarh who looted jewellers of Bada Bazaar here. 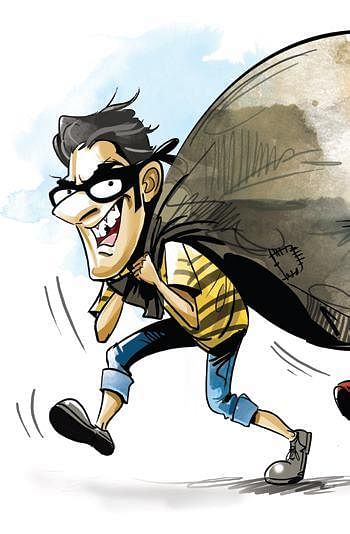 The arrested robbers - Lokesh Srivas (29) and Lokesh Rao (24) - had looted gold ornaments weighing over 1.4 kg of gold from Bindo Jewellers and nearby Kesav Jewellery at Bada Bazaar on October 30, Berhampur SP Pinak Mishra said. In March, Srivas and Rao were arrested in different cases and lodged in Durg jail of Chhattisgarh. During their stay, they became friends.

After being released on bail, the duo chalked out a plan to loot jewellery shops and selected Berhampur to carry out the crime as Rao has relatives in the Silk City. They first looted Bindo jewellers by breaking open the staircase door and later targeted Kesav Jewellery.

The two stores are situated in close proximity in a crowded area of the city. They then returned to Chhattisgarh and sold a major portion of the looted gold ornaments. In the meantime, Berhampur police formed four teams to probe the incidents. During investigation, police found a clue that the robbers belonged to Chhattisgarh.

A team reached Chhattisgarh and nabbed the two criminals from Kabeerdham with the help of local police. Gold ornaments weighing 168 gm, Rs 12 lakh cash, a new car and portable gas cutting machine were seized from their possession. During interrogation, the duo confessed to their crime and revealed that they were involved in several loot incidents in various states. Srivas and Rao didn’t know each other until March when they met for first time in Durg jail.

They sold most of looted gold ornaments and with the money, purchased a car and travelled to Allahabad and other areas. The duo was produced in a local court in Chhattisgarh and brought on three-day transit remand to Berhampur. On Sunday, they were produced in the SDJM court here. Two teams of Berhampur police are still camping in Chhattisgarh and Allahabad to recover the rest looted gold, the SP added.