The pandemic year: How 2020 unfolded in Odisha

As 2020 comes to the end, TNIE looks back at how the year unfolded in Odisha and how the State made its way through one of the world’s worst pandemics.

It was on this day last year, the discussion in the evening editorial meeting here at TNIE Bhubaneswar veered towards a mysterious virus spreading in the Hubei province of China and causing a number of people to fall sick with severe pneumonia. The talk moved to the possibility of a developing contagion and moving out of China to even land in our soil. Most of us scotched the contention, reeling out examples of SARS, MERS, Ebola – how they did not spread to India and how the only pandemic in our recent memory, Swine Flu of 2009, was dealt with and eventually mellowed into a seasonal flu.
Today, 365 days later, we realize how wrong we were. The virus from the SARS family itself has become the only story of the year 2020 – one that has ravaged every continent and brought the entire world to its knees. India and Odisha unspared too.

Odisha, which saw its first novel coronavirus or Covid-19 case in mid-March, today has 3.29 lakh afflicted with 1,871 deaths and counting. Compare this to the H1N1 Swine Flu pandemic – only 840 persons in the State have been infected and 109 lost their lives in a decade since the virus first struck in 2010. As 2020 comes to the end, we look back at how the year unfolded in Odisha and how the State made its way through one of the worst pandemics that humankind has ever witnessed.

As the novel coronavirus began to spread beyond China in January and the knowledge about its highly infectious form along with fatality rate became apparent, Odisha was among the fast movers to announce a Statewide alert. By beginning of March, the State government had issued advisories to all districts and was ready with standard operating procedures (SOPs) including screening of incoming travellers from abroad.

The first Covid-19 case detected in the State on March 15 eventually was a Bhubaneswar native staying in Italy, who had returned after the European country was severely hit by the virus.  By April 10, the number touched 50, with all infected persons having travel history to outside Odisha or abroad. The participants of the Tablighi Jamat in Delhi, who had returned from the event were in focus then with several of them testing positive. Then came the next surge fuelled by migrants returning from West Bengal mainly to the districts of Balasore, Bhadrak and Jajpur. Odisha recorded its 100th case on April 24 and touched 500 on May 12, when the return of the migrants was in full flow.

There was no respite thereafter and the graph began to shoot vertically reaching 10,000 on July 7 and 50,000 a month after on August 11. With community transmission setting in, the months from July to November saw the rampage of the virus and Covid cases crossed three lakh. The highest single day spike recorded in the State was 4,356 on September 26 during the period when Odisha found its place among the top ten affected states in the country and clocked a test positivity rate of more than 10 per cent. While the case incidence has come down since beginning of December, signaling the end of the first wave, the total number on date stood at 3.29 lakh.

The State registered its first death with a 72-year-old man from Bhubaneswar succumbing to the virus on April 6. Since then, as many as 1,871 persons have died of Covid-19. Odisha, though, has among the lowest death rates in the country with around 0.6 per cent mortality rate against the national average of 1.45 per cent.Among districts Khurda, which includes Capital city Bhubaneswar, is the worst affected with 52,643 cases followed by Cuttack at 28,663 cases; Ganjam, the home to most migrants, with 21,800; Sundargarh, mainly Rourkela, at 14,575; and Puri with 13,993 cases. Bhubaneswar accounts for 31,593 cases and 239 deaths while Cuttack has recorded 16,184 cases and 85 deaths as on date.

Odisha was among the first states in the country to rise to the threat of the pandemic and started early measures from January itself with focus on ensuring quality healthcare to the afflicted and minimizing deaths. From the beginning, the State government decided to provide free treatment to patients at dedicated facilities and not mix them with general health infrastructure. Odisha was among the first to set up standalone Covid hospitals in the Twin City of Bhubaneswar and Cuttack with a bed strength of 1,000 in the beginning of April. With cases rising, the facilities were expanded to the district level and by October the dedicated hospitals went up to 50 with 8,000 beds, besides 22 Covid care centres which had the capacity to lodge 22,000 patients, with mild symptoms. The government roped-in private  hospitals to set up dedicated Covid facilities and ensure that all confirmed patients were accommodated and provided necessary treatment.

Starting with only one laboratory for Covid tests at the Regional Medical Research Centre (RMRC) of ICMR, the State now has 54 labs including 35 government facilities. The State has conducted 60 lakh tests by December 1, with the highest nearly 67,000 tests on a day conducted on August 22.
Odisha again was the first state in the country to declare lockdown across eight districts and five cities as early as March 21, four days before the national lockdown was announced by PM Narendra Modi on March 23. It also extended the lockdown till April 30 and imposed complete shutdowns in several affected cities and districts to combat the virus.

In a bid to ramp up health infrastructure, the Naveen Patnaik government instituted an empowered mechanism to speed up procurement of hospital equipment and protective gear like masks, PPEs, sanitisers. Grassroot level surveillance was intensified with training of field staff including health workers, ANMs, ASHAs, etc., to undertake door-to-door surveys for symptomatic people, contact tracing and isolation of suspected cases.

THE RETURN OF MIGRANTS

The announcement of the nationwide lockdown in March fuelled a reverse migration of unfathomable proportions across the country. From April itself, migrant workers began to troop back suffering intolerable hardships by walking hundreds of kilometers to return home. Odisha was no different. More than eight lakh migrants came back to the State between April and May, with Ganjam accounting for the most number. 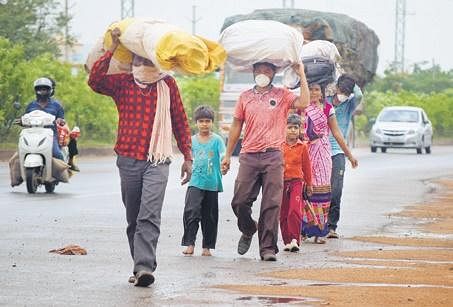 The State government took several measures for bringing back the migrant workers through trains and buses from different parts of the country including Gujarat, Maharashtra, Kerala, Tamil Nadu, Andhra Pradesh and Karnataka, etc. With a plan to segregate them from the society on their advent, so that virus would not be transmitted to the communities, the government made it mandatory for all returnees to be housed at temporary medical camps (TMCs) set up in all blocks. As many as 16,824 TMCs were set up at 6,798 gram panchayats to house the migrants for 14 days before allowing them to mix with the families and communities.

In a significant decision, Chief Minister Naveen Patnaik delegated Collector’s power to the sarpanchs for management of the TMCs. They were also empowered to take local-level decisions on checking the spread of corornavirus.However, like even the best laid plans fall apart, this too had its pitfalls. Not willing to accept the 14-day quarantine at TMCs, many migrants not only evaded screening but also escaped from the centres across districts, leading to the inevitable. They fuelled the virus transmission at community-level and from May onwards, Odisha witnessed the steep spiral of Covid-19 cases across districts.

The Rath Yatra of 2020 was historic in more ways than one. For the first time, the biggest cultural festival of Odisha was held without participation of devotees and the three majestic chariots were pulled to the Gundicha temple by only sevayats of the Sri Jagannath Temple. After initially staying the annual festival on grounds of avoiding large congregations in the midst of the pandemic, the Supreme Court gave its nod allowing only 500 persons to pull each chariot all of whom should have tested negative for the virus.Under heavy police bandobast and a 41-hour shutdown in the entire district, the Rath Yatra proceedings began and were completed on time. Similar arrangements were put in place for Bahuda Yatra.

In its rush to procure protective gear and equipment for healthcare workers and hospitals, the government seemed to have forsaken transparency and was faced with allegations of large-scale irregularities.  Truckloads of kits remained stranded at the godown of the State Medical Corporation for over a week as a controversy over the process of procurement erupted. Even as the high-power procurement committee was disbanded in the wake of the allegations, the issue has been taken up by the Lokayukta. Several senior officials are in the dock over the procurement mess.

The government too faced flak for low level of testing. The number of tests remained in sub-5,000 level during the crucial months of May, June and July, which is also attributed to have led the surge as many cases were left undetected to continue transmitting the virus in the society. Further, even as tests were raised in subsequent months, the heavy reliance on antigen tests, despite Central government instructions on at least half RT-PCR tests. Rapid antigen tests continue to be over 85 per cent of tests in Odisha. The casualty rate shown by the government also raised eyebrows as number of deaths per day continued to be at similar-level for days together. If for a particular period, the death rate was between 7 and 9 per day, it extended to 11 to 15 for the next. Nowadays it hovers around 3 to 4.

Now we are on Telegram too. Follow us for updates
TAGS
Odisha 2020 with TNIE