An alarming rate of road kills of elephants has failed to wake up the Forest and Environment Department.

BHUBANESWAR: An alarming rate of road kills of elephants has failed to wake up the Forest and Environment Department. Five months after Wildlife Wing asked the Divisional Forest Officers (DFOs) to identify vulnerable sites, only about half have responded to the order.

After three elephants were mowed down by a bus in Keonjhar last year in August, the Wildlife Wing of Forest and Environment department asked all Divisional Forest Officers (DFO) concerned to identify vulnerable sites along national and state highways where movement of elephants and other animals is frequent and underpasses are an urgent need along with other safety measures.

So far, just 15 DFOs have submitted their report, while the rest have not responded, sources said. As a result, the compilation of black spots for the wildlife has not been done. The list is supposed to be sent to National Highway Authority of India and Transport department for putting in place safety measures and creation of underpasses.

The Wildlife Conservation Officer even issued a reminder to the DFOs in this regard on December 20 but many are yet to comply with it.By end of January, in the current fiscal (2019-20), Odisha has recorded 15 elephant deaths due to various accidents, including four deaths in road mishaps and one in train collision. While the DFOs have been conspicuous by their indifference, Central Government agencies such as NHAI and Ministry of Environment, Forest and Climate Change have been equally apathetic too. The Athagarh Forest Division had demanded construction of two animal underpasses on National Highway-55 as per the Site Specific Wildlife Conservation Plan but NHAI has been sitting pretty, sources said.

Sources in Forest department also alleged that although death of elephants have been reported in the State due to train accidents, funds are yet to be released by MoEFCC for construction of railway underpasses and overpasses to prevent death of wild animals.

Proposals were submitted for construction of underpasses and overpasses to prevent death of wild animals in Angul, Athagarh, Athamallik, Dhenkanal, Bamra, Bargarh and Jharsuguda divisions. Work will be executed by the Railways after release of funds by the Ministry, an official from Forest department said.
Meanwhile, Additional PCCF Sashi Paul said Gajabandhu Scheme, launched on a pilot basis in Athagarh and Dhenkanal, will be implemented across the State this year to involve villagers as Gajabandhus (friends of elephants) to track their movement and prevent such mishaps as well as human-elephant conflict.
On Thursday, an elephant calf was run over by a truck in Dhenkanal district while another was injured. The State has 420 km length elephant corridor spread over 870 sq km area in 17 wildlife divisions. 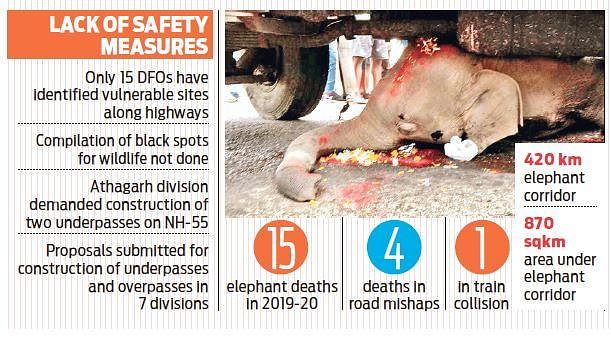 Stay up to date on all the latest Odisha news with The New Indian Express App. Download now
TAGS
Odisha elephants Forest Officers