BHUBANESWAR: After initiating the move to install pre-paid smart energy meters in all Government offices well ahead of Union Minister Nirmala Sitaharaman’s announcement of Central support to States and Union Territories to reduce power distribution loss, the State Government is seriously contemplating to extend the facilities to all electrified households.

The Odisha Electricity Regulatory Commission (OERC) is reported to have recommended the Government to install one lakh smart meters with pre-paid facilities in loss-prone areas of the State.
The OERC made the recommendation after extensive study of the power consumption pattern, energy requirement and demand-side management, consumers with functional and non-functional meters, un-metered consumers and related issues in power distribution.

“A task force was constituted by OERC for installation of smart meters in the areas of operation under four distribution companies (discoms). Different groups under the task force visited most of the places across India where smart metering is implemented successfully,” Energy Minister Dibya Shankar Mishra said.
After careful consideration, OERC has given feedback to the Government for installation of one lakh pre-paid smart meters in the four discoms. It will definitely help in reducing aggregated technical and commercial (AT&C) loss in the State, which stands at a very high percentage, he added.

The Minister said the Government has taken active steps to install smart and pre-paid meters on a pilot basis in Sambalpur and Rourkela under Wesco. It was decided to install 4,500 pre-paid smart meters in Sambalpur in the first phase and extend the facilities to Rourkela in the next phase.

“Around 2,899 pre-paid energy meters (both single and three-phase lines) have been installed in Government offices across the State. The Nesco has taken the lead by installing 1,759 meters followed by 840 in Wesco area and 150 each in Southco and Cesu areas,” Mishra said.

Acknowledging the fact that the power sector in the State is in crisis due to power theft and non-payment of bills leading to huge loss to discoms, the Energy Minister said the installation of prepaid or smart meters will benefit both consumers as well as the utilities.

In her budget speech on Saturday, Sitharaman urged all States and UTs to replace conventional electricity meters with pre-paid smart meters in three years, with the aim of cutting distribution losses. 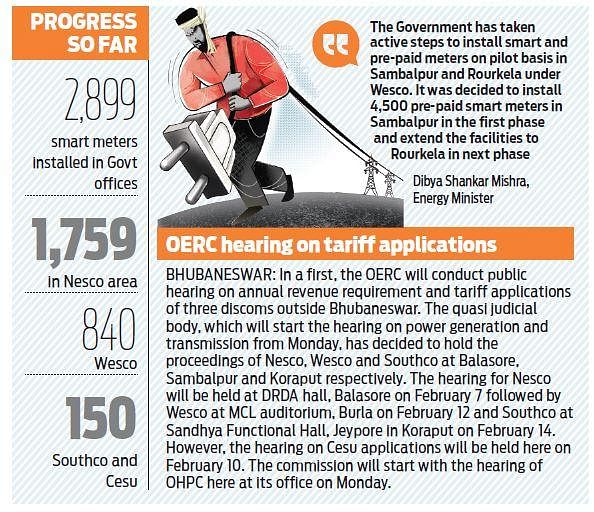