RMC in toilet trouble over payment of IHHL assistance to beneficiaries

ROURKELA: Rourkela Municipal Corporation (RMC) has landed in controversy amid allegations by several beneficiaries that they have not received final payment for the construction of Individual Household Latrines (IHHLs) under the Swachh Bharat Mission (Urban).

Residents of Madhusudanpali slum alleged that despite being entitled to RMC’s IHHL scheme, they have constructed toilets from their own resources and the reimbursements are still due. 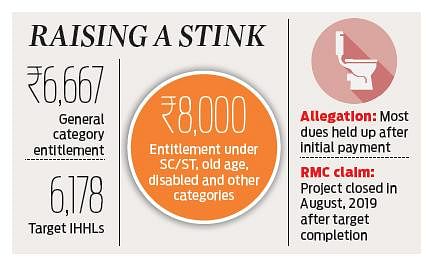 “I got an initial amount of Rs 3,300 but still completed the IHHL, funding the remaining amount on my own but RMC is yet to release the rest promised amount,” said Lalita Devi, a resident of the slum.

Another beneficiary of the same locality, Kusum Verma, said she initially got Rs 2,000 and carried on the IHHL work from her own finances but recently got a notice from RMC which stated that her sanctioned application for the remaining funds stands cancelled as she failed to complete her latrine project.

The RDCC has sought details of IHHL beneficiaries from the RMC for analysis and will stage a protest if the payments are held up for long.

Meanwhile, RMC sources said the civic body closed the IHHL project in August 2019 after achieving the target of construction of 6,178 IHHLs.