27 per cent dip in rail budget for Odisha

Odisha has been allocated Rs 4,373 crore for different railway projects in the Union Budget for the 2020-21 fiscal.

BHUBANESWAR:  Odisha has been allocated Rs 4,373 crore for different railway projects in the Union Budget for the 2020-21 fiscal. The allocation is around 27 per cent less than that of last fiscal when the State had received Rs 5,993 crore.While the total outlay for projects in the State in 2019-20 was Rs 4,593 crore, National Thermal Power Corporation (NTPC) had invested Rs 1,400 crore in Jharsuguda-Barapali coal corridor project.

Only one new project has been introduced this time as the stress has been laid on completion of on-going projects that are stuck due to delay in land acquisition leading to cost overruns.The 241 km Sambalpur-Gopalpur line via Phulbani, to be constructed at an estimated cost of Rs 2,957 crore though has received in-principle approval,  awaits the approval of Cabinet Committee on Economic Affairs and NITI Aayog. A token allotment of Rs 1 lakh has been made for the project. 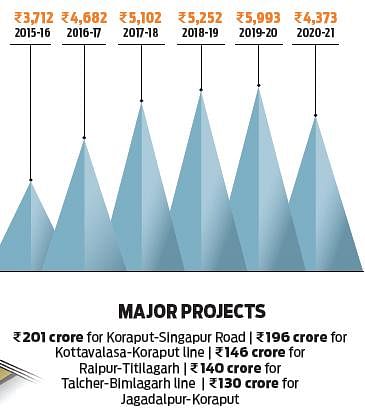 Some of the old on-going projects that were longing for funds have been given priority as Khurda Road-Balangir line got Rs 520 crore against Rs 350 crore in 2019-20.  Angul-Sukinda project was allotted Rs 450 crore against Rs 250 crore last year.Only Rs 100 crore has been provisioned for Haridaspur-Paradeep project as it is nearing completion and will be commissioned by March this year. The project was allotted Rs 400 crore last year.

Doubling of projects, especially Sambalpur-Talcher, Sambalpur-Titilagarh, Titilagarh-Rayagada and Titilagarh-Raipur besides electrification of Khurda Road-Balangir and Lanjigarh Road-Junagarh Road lines will be undertaken on priority basis.The Centre has allotted Rs 1,165 crore for construction of Road Over Bridges (ROBs) and Road Under Bridges (RUBs) to enhance safety and eliminate level crossings and Rs 20 crore for wagon repair workshop at Maneswar near Sambalpur.

Stay up to date on all the latest Odisha news with The New Indian Express App. Download now
TAGS
Railway budget Odisha