Worry over absence of CCTVs at exam centres

Last year, the School and Mass Education department had directed the superintendents of centres to complete installation of CCTVs in their high schools. 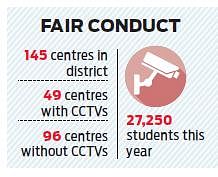 Last year, the School and Mass Education department had directed the superintendents of centres to complete installation of CCTVs in their high schools. But even after a year, around 67 per cent of examination centres have failed to comply with the directive.

Alleging fund crunch, the centre authorities said they are unable to install cameras due to lack of money and no support from the Government. “We are ready to follow the guideline but do not have enough funds. If the State Government thinks CCTVs are essential for fair and transparent conduct of exams, it should release funds for the purpose,” said a headmaster of a Government high school.

District education officer Krushna Chandra Nayak said requisite steps are being taken to ensure smooth and fair conduct of the examinations. As many as 27,250 examinees including 620 Madhyama and open schools of the district will be appearing for the annual HSC examination in the district this year.

Stay up to date on all the latest Odisha news with The New Indian Express App. Download now
TAGS
High School Certificate