It was in 1993 that Odisha first constituted the commission in accordance with the provisions of Odisha State Commission for Backward Classes Act, 1993.

BHUBANESWAR:  The State Government on Wednesday constituted the State Commission for Backward Classes with the appointment of former High Court judge Justice Raghunath Biswal as chairman.

The move to constitute the OBC Commission came a day after National Commission for Backward Classes (NCBC) chairperson Bhagwan Lal Sahni slammed the Government for its apathy towards backward communities and delay in appointing chairperson of the commission. 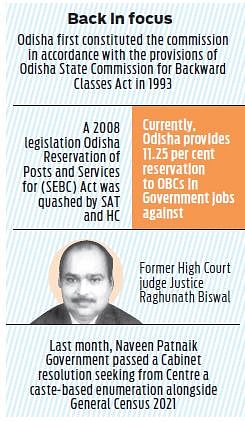 The other members of the commission will be Navneeta Rath, Mitali Chinnara and Prasanna Kumar Patra. Senior bureaucrat Veer Vikram Yadav has been nominated as Member-Secretary of the commission, said a statement from the Chief Minister’s Office.

It was in 1993 that Odisha first constituted the commission in accordance with the provisions of Odisha State Commission for Backward Classes Act, 1993.

However, after the first tenure, the panel was never put back in place. Last month, when the Naveen Patnaik Government passed a Cabinet resolution seeking from Centre a caste-based enumeration alongside General Census 2021, the Opposition targeted it for not forming the OBC Commission and implementing 27 per cent reservation in government jobs as well as educational institutions as recommended by the Mandal Commission.

Union Steel and PNG Minister Dharmendra Pradhan, who was vocal about the demand for OBC Commission said though belatedly, the State Government finally constituted the commission and urged the Chief Minister to take measures for providing reservation due to the OBCs who have been deprived of it for last 30 years. Currently, Odisha provides 11.25 per cent reservation to OBCs in Government jobs.

In 2008, it enacted the Odisha Reservation of Posts and Services for (Socially and Educationally Backward Classes) Act seeking 27 per cent reservation in posts and services under the State in case of direct recruitment for the SEBC subject to exclusion of creamy layer.

However, it was quashed by the State Administrative Tribunal and later by the Orissa High Court in 2017. With the Centre recently turning down a request for SEBC enumeration, formation of the panel could be the State Government’s first move towards conducting the census itself.

In fact, a BJP delegation had met Sahni on Tuesday and submitted that many States had crossed the 50 per cent threshold in reservation to give justice to OBCs and Odisha should be directed to follow that lead. The OBC Commission will have mandate to inclusion/exclusion of a particular caste or community as Backward Class and advise the State Government as it deems appropriate.

Chairperson Justice Biswal had earlier served as president of State Consumer Dispute Redressal Commission from November 2012 to March 2017. While Rath is a social scientist, who conducted studies on Backward Classes, Chinnara is the professor of Economics.

Patra is a renowned anthropologist and his research included socio-cultural, biological anthropology and demography. The tenure of the chairperson and members of the commission is three years from the date of assuming office.