Odisha growth to slide, but remain above national rate

Growth in the State’s economy is largely driven by agriculture, manufacturing and mining sub-sectors.

BHUBANESWAR: After registering an impressive growth of 7.9 per cent in 2018-19, the State’s economy is likely to decelerate to 6.16 per cent in the current financial year.However, the State continues to keep the pace of its economic growth higher than the national growth rate of 5 per cent as per the advance estimate.

The Economic Survey Report 2019-20 tabled in the Odisha Legislative Assembly on Monday attributed the decline to lower agriculture production being affected by cyclone and deceleration in mining and manufacturing sectors. Growth in the State’s economy is largely driven by agriculture, manufacturing and mining sub-sectors.

After a dip in the growth in 2014-15, the Odisha economy recovered to 8 per cent in 2015-16 and further jumped to 15.6 per cent in 2016-17 due to higher production in agriculture, fiscal consolidation and increase in manufacturing output.

The growth softened further in 2017-18 to 6.3 per cent due to decline in agriculture production and contraction in manufacturing and mining sectors before bouncing back to 7.9 per cent in 2018-19, the report said.

Only four States - Andhra Pradehs, Bihar, Telangana and West Bengal - recorded double digit growth in 2018-19 while 14 States including Odisha were above the national level of 6.8 per cent.

The report said the services sector is the largest contributor to Odisha’s growth with 40.51 per cent followed by industries sector with 39.6 per cent and agriculture and allied sector with 19.90 per cent in 2019-20.

During the same period, agriculture and allied is expected to achieve growth at constant price (2011-12) of 7.61 per cent, while industries sector will attain growth of 4.88 pr cent and services sector with 6.84 per cent, the report said.

The average annual inflation based on consumer price index remained stable between 2 per cent and 3 per cent in 2017-18 to 2018-19 and increased to 3.8 per cent in 2019-20 (till December).The report is, however, hazy on poverty reduction and employment. On employment scenario, it said the working age (15-59) population of the State has increased from 21.5 million in 2001 to 25.8 million in 2011. The share of the working population of the total population is 61.5 per cent.

“The working age population will grow to 30.4 million in 2021 (projected) and this is of course a challenge before the Government to provide them employment,” the report said. 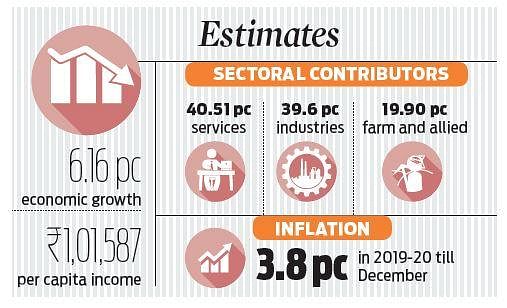