BHUBANESWAR:  Even as the State Government has set a revised target to provide piped water supply to all households in rural areas by 2024-25, it has a tough job in hand as more than 50 per cent of the identified villages are to be covered in next five years.Of 47,366 villages identified by the Panchayati Raj and Drinking Water department for the facilities, the Government claimed to have 23,072 villages under the piped water supply (PWS) scheme.

As the piped water supply projects are moving at a snail's pace, the department could cover only 4,058 villages in five years time from 2014-15 to 2018-19. Replying to a question of Congress member Narasingh Mishra, Panchayati Raj and Drinking Water Minister Pratap Jena said 23,072 out of 47,366 villages in the State have been supplied with piped drinking water. The remaining villages would be covered by 2025, he added.

Accusing the Minister of misleading the House by furnishing 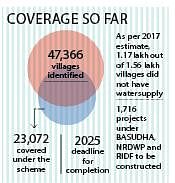 false data, Congress leader Tara Prasad Bahinipati said 50 per cent of the drinking water projects are lying defunct. "There are inconsistencies in the claims of the Government and reality of the projects implementation. The Minister had earlier assured supply of safe drinking water to all villages by 2020. Now the Minister has shifted the deadline to 2025," he said.

Besides, the number of villages identified are even less than the total revenue villages of the State. As per 2017 estimate, 1.17 lakh out of 1.56 lakh villages, including hamlets, did not have piped water supply. The same year, the Government had set a target to provide safe drinking water to majority of households by 2020, he added.

Expressing concern over undue delay in implementation of PWS projects, senior BJD member and former Speaker Pradip Amat said several drinking water projects under construction for the last 13 years in his constituency are not completed.

BJP MLA Mohan Charan Majhi said the Minister told the Assembly during the winter session that the department had targeted to construct 1,716 piped water projects under BASUDHA, NRDWP and RIDF in the current financial year. The rate of project completion is not even 50 per cent till date. The achievement is nil in tribal-dominated and Naxal-affected districts, he added.