The Railways will construct adequately-sized subways for smooth passage of road traffic at 100 per cent railway cost and provide suitable road to nearby grade separators.

BHUBANESWAR:  Subways will soon replace level crossings that fall under the jurisdiction of South Eastern Railway (SER) in the State.

The State Government has directed Collectors of three districts to expedite the process for issuance of no-objection certificates (NOCs) in favour of SER so that the proposed subways, which will facilitate uninterrupted passage of road traffic, can be built as soon as possible. The direction came after SER General Manager SK Mohanty urged Chief Secretary Asit Tripathy seeking consent from the State Government for closure of level crossings. 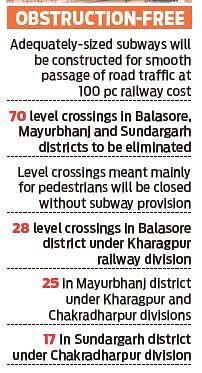 Citing that traffic density of railway as well as road is increasing day-by-day and existence of level crossings is not at all a desirable convenience of road users, Mohanty said the level crossings need to be removed for serious safety hazards and punctual running of trains.

The Indian Railways has taken up elimination of level crossings on a mission mode. The Railways will construct adequately-sized subways for smooth passage of road traffic at 100 per cent railway cost and provide suitable road to nearby grade separators wherever feasible and convenient.

While as many as 70 level crossings in Balasore, Mayurbhanj and Sundargarh districts have been selected to be eliminated, there are some level crossings with negligible traffic density meant mainly for pedestrians which will be closed directly without the provision of subways.

Though the officials of SER had been pursuing the matter with district authorities for obtaining NOCs for the last few months, the SER General Manager sought a direction from the Government to expedite the process.

Works Minister Prafulla Kumar Mallick said Collectors of the three districts have been asked to issue NOCs at the earliest and intimate the department after the process is over. "The level crossings should be replaced with subways immediately. It will not only prevent accident, but also help ease traffic," he added.

Earlier, the East Coast Railway (ECoR) had eliminated 414 unmanned level crossings in its jurisdictions in Odisha, Chhattisgarh and Andhra Pradesh.