Every year, adult females crawl from the Bay of Bengal up to Gahiramatha to dig nests for laying their ping-pong ball sized eggs.

KENDRAPARA:  As many as 4,07,194 Olive Ridley turtles laid eggs after finishing their eight-day long Arribada on Nasi-1 and Nasi- 2 islands at Gahiramatha marine sanctuary within Bhitarkanika national park from March 14 to 21. “The female turtles take around 20 years to sexually mature and produce eggs. We think the reason for this increase in number this year is because the baby turtles, born on the same beach two decades back, came back and laid eggs”, said DFO of Bhitarkanika National Park Bikash Ranjan Dash. Every year, adult females crawl from the Bay of Bengal up to Gahiramatha to dig nests for laying their ping-pong ball sized eggs. 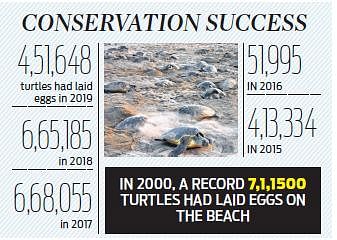 The arrival of more than four lakh turtles at Gahirmatha this year reflects the success of conservation work since sea turtles were put on the endangered species list and declared a schedule - 1 animal on par with tiger and elephant under Wildlife Protection Act, 1972. The measures adopted by forest officials and other Government and non-Government agencies ensured the arrival of turtles in large numbers at the beach this year.

Several turtles lay eggs in the pits dug by others and in this process, thousands of eggs get destroyed. Dash said forest guards have been deployed to prevent the entry of predators to nesting sites. Hatchlings will emerge from the eggs after 45 days and find their way to the sea. The State Government has imposed a ban on fishing activities in Gahirmatha till May 31 to protect the turtle.

Now we are on Telegram too. Follow us for updates
TAGS
Olive Ridley turtles