The  borders are sealed to contain a virus. The neighbours, West Bengal and Odisha, are at a new distance.

BHUBANESWAR: The borders are sealed to contain a virus. The neighbours, West Bengal and Odisha, are at a new distance. But, the crisis has dissolved thematic boundaries of an ancient art form, Pattachitra or Pat Chitra (as known in Bengal), in both the states.

Suffering from uncertainty of income, the ‘chitrakars’ (painters) are painstakingly designing intricate narratives of the pandemic in a bid to attract urban art lovers by depicting the new normal - wearing masks, hand washing and social distancing. Hailing from two different communities, the artists in Odisha’s Raghurajpur and Bengal’s Noya village in West Midnapore have altered the age-old religious themes in their own ways.

The tales of COVID have been illustrated with images of long-eyed humans with rounded bodies, angular limbs, and pointed nose - resembling the mythological figures of traditional ‘pattachitra’. In Raghurajpur, 38-year-old Apindra Swain is one of the first experimentalists. Listening to the bulletins day and night as the COVID pandemic unfolded, he concluded that humankind was confronted with a ‘demon’ of folklore.

“The demon can only be defeated by wearing masks. So, the characters in all my paintings have their mouths covered with masks,” said Apindra, who has so far conceptualised 15 to 20 COVID-related art pieces. He hoped that a transition in the theme could not just spread awareness among masses but also help him survive the crisis period. He now pins hope on online initiatives to find takers for his paintings.

On the other side of the border, the Muslim ‘Patuas’ (Bengali term for Pata artists) in Noya, around 70km from Kharagpur, have also taken up Covid themes for their paintings and performances. Unlike their Hindu counterparts in Odisha, they also double up as storytellers. Like bards, the ‘Patuas’ traditionally travel through villages with paintings of epics done on scrolls and sing songs narrating the stories. But, social distancing norms don’t allow ‘patuas’ to host such performances in the villages or elsewhere. Thus, the itinerants are now busy practising the form online.

Some artists in the village are uploading their performances on Youtube, hoping to earn a little. And, both their songs and paintings now speak of social distancing and masks. A national award winner, Gurupada Chitrakar has composed six songs and paintings on COVID. With the help of his sons, the 2004 awardee has shared the video online. 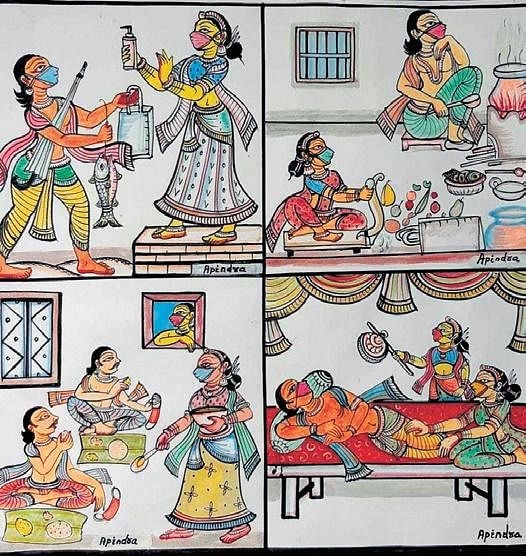 Stay up to date on all the latest Odisha news with The New Indian Express App. Download now
TAGS
coronavirus COVID19