In a letter to Pokhriyal on Tuesday, Pradhan said the amendment has come under severe criticism from the State’s academic community due to the drastic and regressive changes.

BHUBANESWAR: Union Minister Dharmendra Pradhan has joined voices of opposition to the recent amendment of the Odisha Universities Act, 1989 through promulgation of an ordinance by the State Government and sought intervention of Union Education Minister Ramesh Pokhriyal Nishank to safeguard the interest of the students and autonomy of the universities. 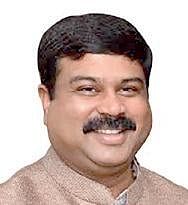 In a letter to Pokhriyal on Tuesday, Pradhan said the amendment has come under severe criticism from the State’s academic community due to the drastic and regressive changes. The ordinance goes contrary to the vision of the Prime Minister in formulation of the National Education Policy to promote autonomy of academic institutions.

Pradhan said the amendment has stripped the universities of their autonomy by bringing them under the State Higher Education department.Highlighting some issues raised by two noted academicians, Pradhan said replacing the Senate with bureaucratic Syndicate effectively means that the universities will be run by the Government-appointed nominees.

The State BJP has also alleged that the abolition of the Senate in universities to make the Syndicate as the highest authority is a well-orchestrated conspiracy of the State Government to bring activities like recruitment, selection of vice-chancellors and overall management under its control and make them bureaucratic institutions.

Similarly, the appointment of vice-chancellor has been restricted by forced entry of a nominee in the search committee and constraining it to a limited number of non-academic candidates, Pradhan alleged.
The academic sanctity of staff appointment has also been dismantled by forced recruitment of professors, assistant professors, and other employees through Odisha Public Service Commission and non-teaching staff through State Selection Board bypassing the selection committee headed by the vice-chancellor.

“Removing the provision of tabling the university audit report in the Assembly, the Government has crippled the constitutional process of discussion and scrutiny of utilisation of funds,” the letter said.
Pradhan said the changes made in the Universities Act are in contradiction with extant practices with other states, and education being a concurrent subject they are incongruous with Central Government policies.
“Going by the Supreme Court judgment in the Osmania University Teachers’ Union case against Andhra Pradesh Government, the ordinance is liable to be struck down by court,” he said.