The significant aspect of all the governments headed by J Jayalalithaa were the welfare schemes. Many of them have been emulated by other states and they also attracted the attention of some foreign countries. Mostly poor and downtrodden women, girls and farmers were the beneficiaries of Jayalalithaa’s welfare policy. 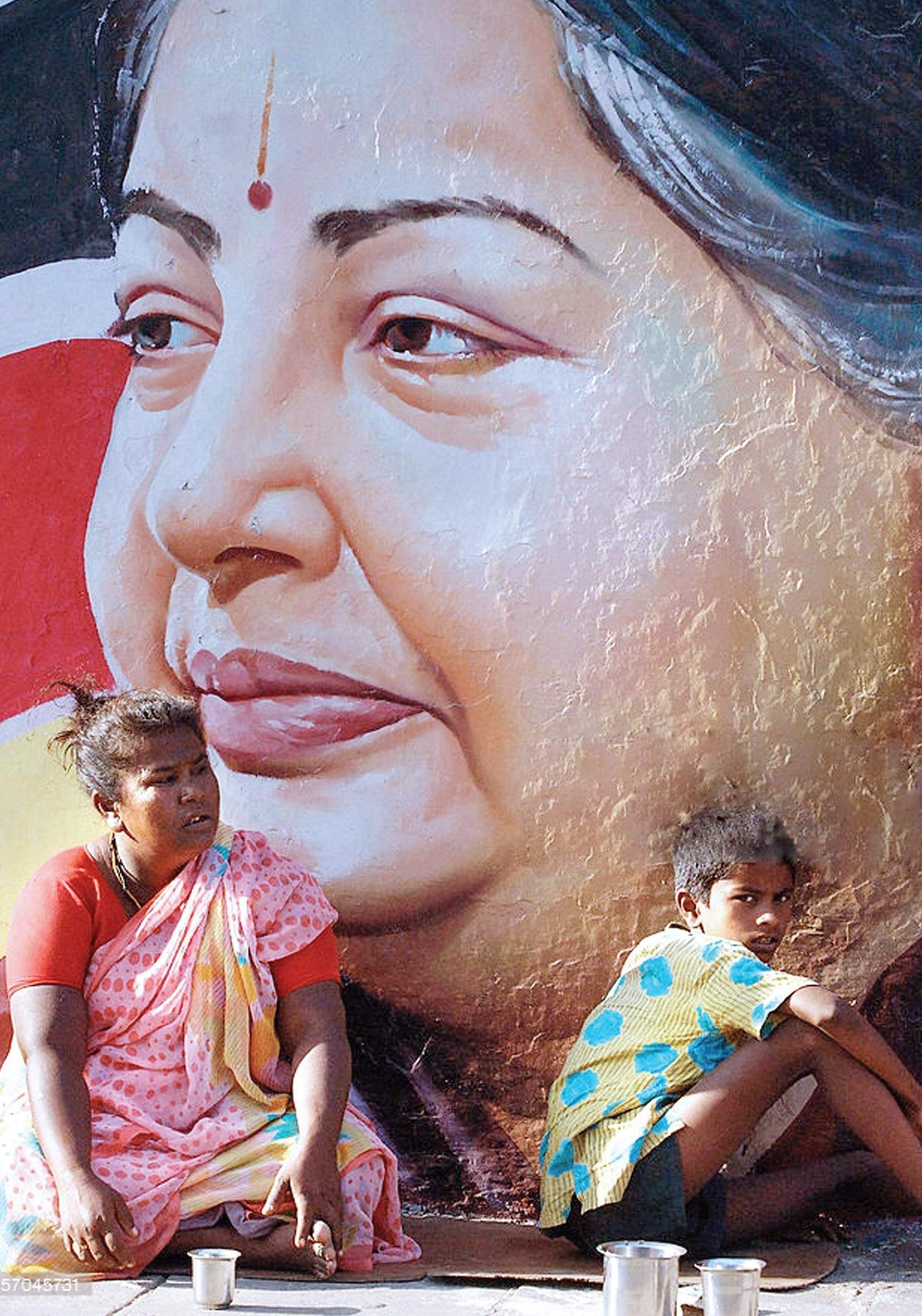 It would not be an exaggeration to say that Tamil Nadu became the fountainhead of welfare schemes whenever Jayalalithaa was in power. Jayalalithaa’s first tenure as Chief Minister during 1991-96 was marked by many new schemes like the revolutionary Cradle Baby Scheme aimed at eliminating the practice of female infanticide — which was prevalent in many parts of the State — and starting of All Women Police Stations, etc. Her second tenure as Chief Minister too had many innovative schemes. 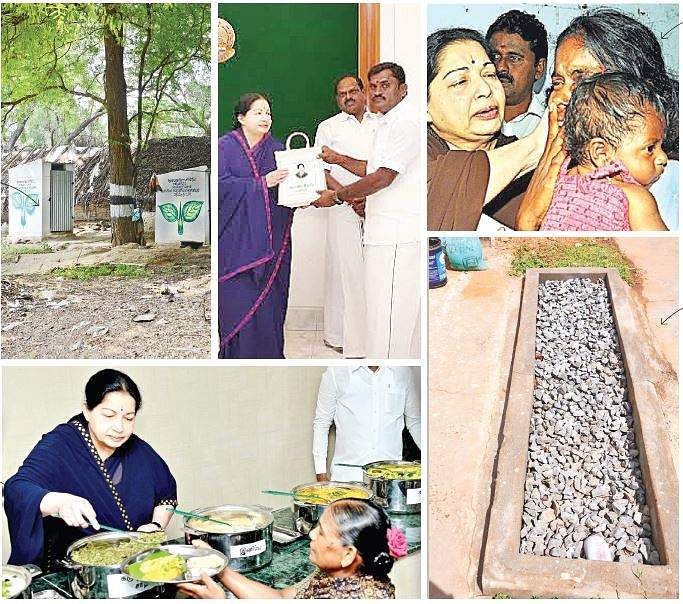 The Farmers Security Scheme, one of her more important schemes, ensured the welfare of farmers and their family members from womb to tomb. The Rainwater Harvesting Scheme was meant to ensure the availability of drinking water to all people. Then there was the Integrated Women Sanitary Complexes in all 12,796 village panchayats, besides the distribution of bicycles to SC/ST students of Class 11 and Class 12 courses, aimed at controlling the school drop-out rate. Jayalalithaa’s final stints as Chief Minister during 2011-15 and 2015-16 saw the distribution of 20kg rice free of cost to 1.83 crore family card-holders and 35 kg rice free of cost to the Antyodaya Anna Yojana card-holders (poorest of the poor) through the Public Distribution System, gold for making ‘Thaali’ (thirumangalyam) Scheme for girls hailing from poor families. Setting up of over 1,000 Amma Canteens across the State, launching of several Amma-brand schemes — Amma Pharmacy, Amma Drinking Water, Amma Cement, Amma Salt, Amma Special Master Health Check-up Scheme for Women, Amma Mobile Phone Scheme for SHGs, distribution of fans, mixies and grinders to 1.83 families, distribution of 60,000 milch cows, four goats each for seven lakh families, distribution of free laptops to Class 11 and 12 students (it has been extended to other students as well), providing sanitary napkins free of cost to adolescent girls, new mothers, women in prisons, etc.

After assuming charge as the Chief Minister on May 25, this term, she rolled out many Ammabrand schemes — Amma Marriage Halls, 500 Amma Parks with several facilities in rural areas, 500 Amma Gymnasiums to help rural youth keep fit.

To curb the social menace of female infanticide in Tamil Nadu and protect children, the government headed by Jayalalithaa launched the Cradle Baby Scheme in Salem district in 1992. She also launched a secondary scheme — Girl Child Protection Scheme — to go hand-in-hand with the Cradle Baby Scheme to ensure elimination of female infanticide. Under the scheme, children abandoned by parents are cared for, received in hospitals, primary health centres, children’s homes and protective homes. The Cradle Baby Scheme is active in Salem, Madurai, Theni, Dindigul, Dharmapuri, Ariyalur, Perambalur, Villupuram and Tiruvannamalai districts. With the child sex ratio, a critical indicator of gender inequality, which has declined in 27 States and Union Territories, including Delhi, in the 2011 census, there has seen an upward trend in Tamil Nadu due to the Cradle Baby Scheme.

The scheme takes care of all small/marginal farmers who own less than 2.5 acres of wetlands or five acres of dry lands and are directly involved in agricultural operations, cultivating tenants, and agricultural labourers in the age group of 18-65 years, who are doing work related to agriculture. These people are eligible for registration as members under the Farmers Security Scheme, which also offers assistance to farmers and their dependants.

complexes for women in all village panchayats

Responding to the sanitation needs of women, the State government decided in 2001 to build Integrated Sanitary Complexes for Women in all the then existing 12,618 village panchayats of the state, on an approximate area of 750 sq.ft. each. Each complex had 14 water closets, two bathrooms, one pump room with pump set, one water tub and stonepaved washing facilities. Adequate water supply for washing and bathing was also provided. The village panchayats provided electricity connections for water supply and lighting, and the allotted families maintained the upkeep of the complex. The complexes are provided with incinerators for disposal of sanitary napkins.

Amma canteens for one & all

Perhaps one of the most enterprising and popular schemes, Amma canteens found resonance among the masses. Amma canteens sell food items at highly-subsidised rates. Launched in Chennai, these canteens are a boon for daily wage workers, slumdwellers, as well as those from low-income sections. The scheme was launched by J Jayalalithaa on February 19, 2013 and since then, the number of these canteens has gone up. The scheme has been extended to other corporations and municipalities. Totally, there are over 650 Amma Canteens across the state.

Jayalalithaa launched the historical Rain Water Harvesting movement in the State in 2001. Legislative measures were taken to make installation of Rain Water Harvesting (RWH) structures mandatory in all buildings. Till June 2016, of 42.55 lakh buildings in corporations (except Chennai) and municipalities, 35.09 lakh buildings (25,650 government buildings and 34.84 lakh private buildings) were provided with RWH structures. Rain Water Harvesting in urban local bodies has also been given a major thrust. Out of 1,482 ponds and temple tanks, 716 have been provided with RWH structures. With this drive, 82 per cent of buildings and 48.31 per cent of ponds and tanks have been covered up to June 2016. Last year, Jayalalithaa announced the Sustainable Water Security Mission which aims at campus rainwater harvesting, stormwater harvesting, renovation of waterbodies with community involvement and recycling and reusing greywater.