'Why secrecy about Jayalalithaa's death?' Gautami asks Modi to probe

In her official blog, Gauthami wrote a post addressed to PM Modi with questions about the death of the Tamil Nadu Chief Minister.

The complete secrecy maintained during the 75-day treatment of Tamil Nadu Chief Minister J Jayalalithaa has given rise to many questions with sections of the public even suggesting foul play. A surprising participant in this conversation about conspiracy is actress Gautami, that too publicly. In her official blog, she wrote a post addressed to Prime Minister Narendra Modi with questions about the death of the Tamil Nadu Chief Minister.

The last blog post of Gautami's that drew a lot of attention was the one where she announced her separation from live-in partner, actor Kamal Haasan. Incidentally, she had met Prime Minister Modi on October 28, 2016, just three days before she made her split with Kamal Haasan public. 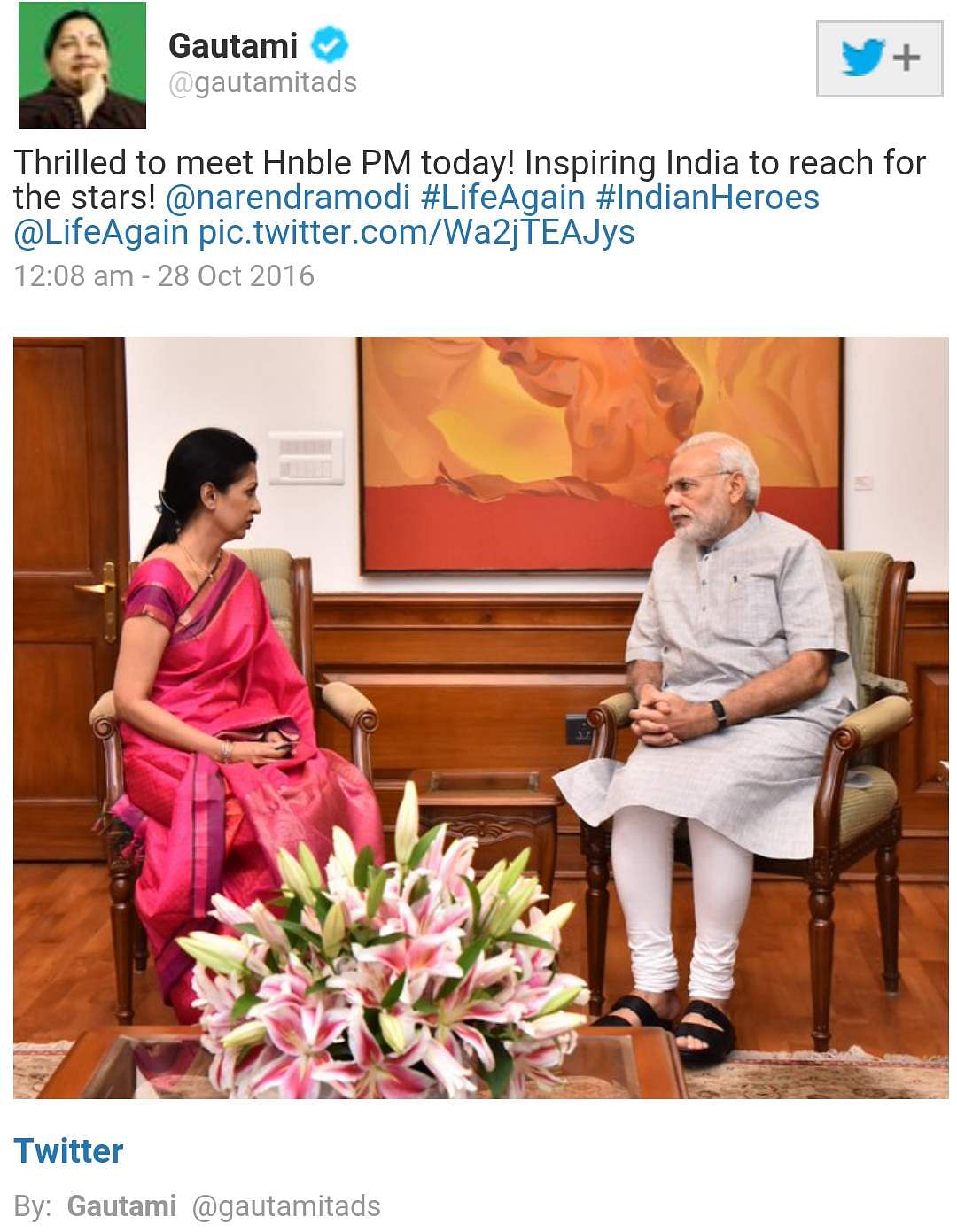 This time she has approached Modi, drawing his attention to the alleged mystery surrounding Jayalalithaa's last days.

Sections of the public have been raising doubts over why such a secrecy was maintained during the treatment. Gautami in her blog post has questioned who were making the decisions about Jaya's treatment and why was nobody, even dignitaries, allowed access to her. She lists few other doubts too wanting to bring them to ears of the Prime Minister.

Here's the full text of Gautami's letter to PM Modi:


The Honourable Prime Minister of India,

I write this letter to you today as an ordinary citizen of India. I am a homemaker, a mother and a working woman. My concerns and priorities in my life are those that are shared by many of my fellow countrymen, primarily to build a safe and nurturing environment for my family that will allow them to live a safe and fulfilled life.

I am also one among the crores who are mourning the recent shocking demise of our late Chief Minister, Selvi Dr. J Jayalalithaa ji. She was a towering personality in Indian politics and was a great inspiration for women from all walks of life. Her leadership of Tamil Nadu, over several terms in office, has brought us to the forefront in many spheres of development. Selvi Dr. Jayalalithaa ji’s undeniable strength and determination to persevere against all odds are a lasting legacy that will continue to inspire individuals of every gender to persist in pursuit of their dreams in life.

Her demise is all the more tragic and unsettling because of the circumstances over the past few months and the sheer volume of unanswered questions about our late Chief Minister’s hospitalisation, treatment, reported recovery and very sudden passing. There has been a near total blanketing of information regarding these matters.

Nobody had been allowed access to her and many dignitaries who visited her with deep concern were denied an opportunity to convey their wishes in person. Why this secrecy and isolation of a beloved public leader and the head of the Tamil Nadu government?

What/whose authority restricted access to the late Chief Minister? Who were the concerned persons who were making the decisions about Selvi Dr. J Jayalalithaa ji’s treatment and care when her health was apparently in such a delicate state? And who is responsible for these answers to the people? These and many other burning questions are being asked by the people of Tamil Nadu and I echo their voice in bringing them to your ears, sir.

No doubt some might say that it is a moot point because it has happened as it has, but that, sir, is precisely my fear. I ask these questions now because it is a primary concern and right of every citizen of India to be aware of and informed about their democratically elected leaders. To be aware of their state of health and ability to perform their duties for the larger good of the people. To be concerned for the wellness and comfort of a beloved leader of the masses. And the fact that a tragedy of such tremendous scale should not go unquestioned and definitely, not unanswered, under any circumstances. If this be the case with a public figure of this magnitude, then what chance does
the common citizen of India have when he fights for his personal rights? The confidence of every Indian in the democratic process that makes our nation so great is precious and must be protected against all odds.

I am writing to you now, sir, with the complete confidence that you share my anxiety and determination to uphold the rights of every Indian to be aware and informed of any factor that impacts our day to day life. You have proven yourself in many ways to be a leader who is unafraid to stand up for the rights of the common man and I am confident that you will heed the call of your fellow countrymen.

With my deepest respects and trust

Stay up to date on all the latest Tamil Nadu news with The New Indian Express App. Download now
(Get the news that matters from New Indian Express on WhatsApp. Click this link and hit 'Click to Subscribe'. Follow the instructions after that.)
TAGS
Modi jayalalithaa death Gautami blog Jaya treatment