COIMBATORE: Many of the athletes from 25 states who reached the city on Wednesday morning for the national-level athletic meet here, had to struggle to get food and transport because of the demonetisation of notes of Rs 500/1000 denominations the previous night.
“We heard of the demonetisation around 10 pm on Tuesday, when we were on the way to Coimbatore by train. We had Rs 2,000 - two Rs 500 notes and one Rs 1,000 note. When we landed in Coimbatore, we were not even able to get into a bus or a cab to reach the stadium. We called the local athletic federation people and they helped us to reach the stadium,” Shiva Kumar, an athlete from Delhi, told Express. 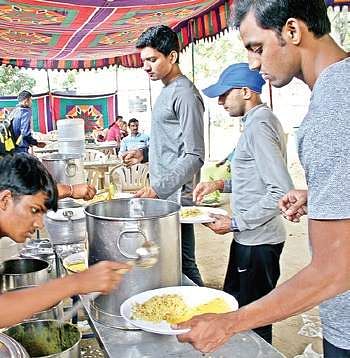 Though the athletes have to have proper food in time to maintain their level of preparedness, some of them were not even able to have food as the notes they had were not accepted by traders.
On Thursday morning, a private catering company agreed to give them food by setting up a stall in the locality. They also helped the athletes to exchange the Rs 500/Rs 1000 denomination notes with them.
“We are offering food according to their diet and day plan,” said R Raja Manikandan, coordinator of the catering service.