With panic purchase depleting stocks in many districts, the salt producers' association has been asked to immediately supply it to other parts of the State, the District Collector said.

THOOTHUKUDI : This is a shortage that simply is not. Inexplicable rumours of an impending salt shortage is driving hordes of people to the neighbourhood shops, leading to a demand that has in turn led to a sharp spike in salt prices in various parts of the State.

The rumours, which began almost immediately after the demonetisation, could not have been more ill-informed: the salt pans at Thoothukudi that spreads across thousands of acres have in fact produced more this season, building up a ready stock of a million tonnes in this coastal district alone. 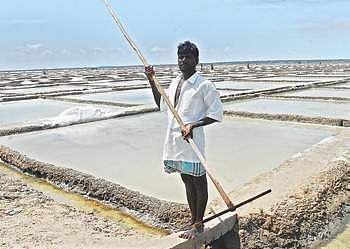 However, with panic purchase depleting stocks in many  districts, the salt producers association has been asked to  immediately supply it to other parts of the State, he  added.

Such was the yield this year that production crossed 20  lakh tonnes in 2015-16 “a one-third increase compared to  the previous year’s 15 lakh tonnes,” said ARAS  Dhanabalan, secretary of the Tuticorin Small Scale Salt Manufacturers Association, adding that exports have also dropped recently.