An unidentified gang defaced some of the milestones with writings in Hindi on National Highway 75 in the district on Friday.

VELLORE : Amidst political parties including the DMK, PMK and MDMK blowing a gasket over a move by the National Highways Authority of India to replace English with Hindi on milestones, an unidentified gang defaced some of the milestones with writings in Hindi on National Highway 75 in the district on Friday.

Among the milestones defaced with black ink were the ones near Gandhi Nagar on which ‘Gudiyatham’ and ‘Vellore’ were written. 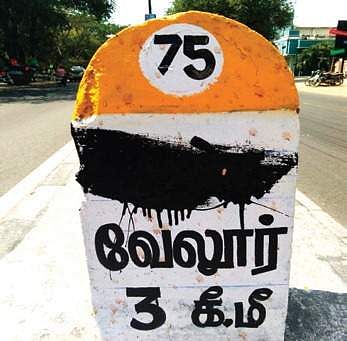 Residents in the locality told Express that the milestones were defaced by a group of unknown people on Thursday  evening.

A few days ago, Hindi replaced English on many milestones on NH 75 and NH 77 in Vellore, Tiruvannamalai and Krishnagiri districts.

After a report by Express on March 29, leaders of political parties including MDMK founder and chief Vaiko, DMK working president M K Stalin and PMK founder S Ramadoss urged the Centre to drop the move, which they termed as a “backdoor entry of Hindi” into the Tamil land. Stalin, in a statement on Thursday, warned that the move would lead to new anti-Hindi agitations across Tamil Nadu.

When contacted, Viruthampattu Police said they are yet to receive any official complaint. “No case has been registered as we haven’t got any complaint.”