The Enforcement Directorate (ED) will not press for the appearance of AIADMK deputy general secretary and party candidate for RK Nagar by-election TTV Dhinakaran, its counsel told the Madras High Cour 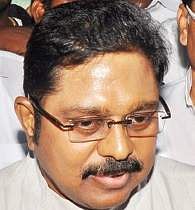 CHENNAI: The Enforcement Directorate (ED) will not press for the appearance of AIADMK deputy general secretary and party candidate for RK Nagar by-election TTV Dhinakaran, its counsel told the Madras High Court on Thursday. The ED is interested only in conducting the trial of the 2 FERA violation cases pending for two decades, he told Justice R Mahadevan when Dhinakaran’s petition seeking to stay/defer the trial came up. The judge, however, declined to either stay or defer the trial pending before the Economic Offences Court-II in Egmore. In the absence of any interim order, the EO could go ahead with the trial, he said. The EO Court on March 27  rejected Dhinakaran’s plea to defer the trial proceedings for 6 weeks to help him  focus on campaigning in RK Nagar.