In villages like Mennendhi and Muthuvayal police directed organisers to restrict the celebrations within their own areas.

RAMANATHAPURAM/MADURAI: No flags, no loud speakers, no bill boards and no celebrations near areas where other communities reside – these strictures by Ramanathapuram police as precondition to grant permission observe BR Ambedkar’s birth anniversary, which effectively reduced the architect of the Indian Constitution into just the leader of one community, has kicked up a row in Tamil Nadu.

The issue came to light after an activist, PB Prince Gajendra Babu, made public the communication from local police inspector to the TN Untouchability Eradication Front member who had sought permission to organise a function at Chathirakudi village in Ramanathapuram district.

In response to the application, inspector Gunasekaran listed seven conditions that should be met to grant permission for the function: Ambedkar's portraits should be removed immediately after paying floral tribute and distributing sweets; no loudspeakers; no sports and games in problematic areas; no new flags, flag posts, boards, portraits or festoons should be put up; no flex boards; no public meeting or rally without prior permission; and no permission for functions in areas where other communities reside.

“The organisation has been conducting Ambedkar’s birth anniversary every year without any restrictions. But this year, we received orders from the police that stated these conditions,” N Kalaiarasan, district secretary of TN Untouchability Eradication Front told Express.

In villages like Mennendhi, Muthuvayal and Chathirakudi, police directed organisers to restrict the celebrations within their own areas, without extending it to areas dominated by caste Hindus. When Kalaiarasan contacted police officials, he was told that all applicants in the district were given similar notice.

“When we asked what the reason was behind imposing such restrictions, local police personnel said they were directed by the police brass,” added P Kasinathan, union secretary of Tamil Nadu Murpokku Ezhuthalar Kalaignargal Sangam, another outfit that had sought permission for holding anniversary celebrations. 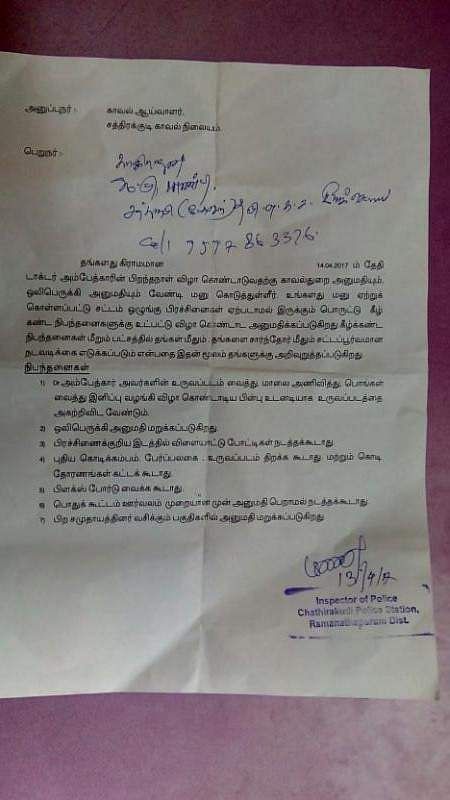 “If his portrait should not be kept in areas where the people from other communities reside, has Ambedkar’s name and image become untouchable,” questioned Prince, also the general secretary of State Platform for Common School System, who was one of the guests at the event at Chathirakudi on Friday.

Pointing out the irony of the order that came on a day when all the leading parties and politicians including ministers made a beeline to pay tributes to Ambedkar’s statues and portraits, Prince urged the State government to ascertain whether home secretary, DGP and SP of the district knew about such a direction.

However, denying this to be a measure to restrain the community from celebrating the birth anniversary of the late leader, inspector Gunasekaran of Chathirakudi station said the move came in view of the persistent caste tensions that exist in Ramanathapuram.

“We have witnessed many untoward incidents in the past, especially over denigrating Ambedkar’s portrait. If anything goes wrong, the issue will not be confined to the district or even the State. Ambedkar being a national icon, echoes will be heard even globally,” Gunasekaran contended.

SP N Manivannan added that the police had not been giving permission for loudspeakers for any event as a measure to keep communal passions in check. “There is nothing specifically against Ambedkar Jayanthi,” he said.

Speaking to Express, Deputy Inspector General (Ramanathapuram range) Kapil Kumar Saratkar noted that Ramanathapuram has been a sensitive district due to caste rivalries, which prompted the police to take precautions. “But these conditions were given based on the topography of the villages, not stereotypes,” insisted the officer.

Now we are on Telegram too. Follow us for updates
TAGS
MaduraiAmbedkarAmbedkar birthdayRamanathapuram