Intended to tackle the present competition from application-based transport services in Tiruchy, auto-rickshaws affiliated to the Centre of Indian Trade Unions has launched a scheme to fix meter.

TIRUCHY: Intended to tackle the present competition from application-based transport services in Tiruchy, auto-rickshaws affiliated to the Centre of Indian Trade Unions (CITU) has launched a scheme to fix meters in their three-wheelers and a revised tariff. As this came into effect on Tuesday, about 750 auto rickshaws are said to be fixed with new meters in the city. Speaking to Express, R Sampath, district secretary CITU, said, “We have about 1,500 auto-rickshaws in the city at present. With the introduction of app-based transport services, most drivers lost their livelihood. As the app services have increased its auto numbers in the district, the ordinary drivers have to struggle to make money.” 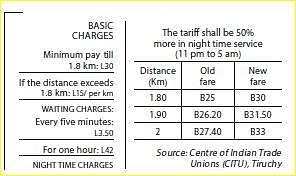 While as per the old tariffs, the minimum fare up to 1.8 km was Rs 25 the new tariff was fixed at Rs 30. Each additional km will cost Rs 15, and the tariff has been fixed in consultation with Regional Transport Office. When contacted, RTO from Tiruchy said that once the government proposed the new fare tariff, the auto unions had taken the issue to the court for increasing the fare.

Following which the government took two months to form a viable fare tariff. Hence the process of the forming the fare tariff is underway and until fixing of proper fare tariff, the prevailing fare shall be allowed. After the implementation of the new fare, all the auto service shall be operated as per such fare.