From the cusp of merger that led to frenetic activities at the memorial for late leader J Jayalalithaa at the Marina beach, the two AIADMK factions returned to familiar zone of uncertainty within just

CHENNAI: From the cusp of merger that led to frenetic activities at the memorial for late leader J Jayalalithaa at the Marina beach, the two AIADMK factions returned to familiar zone of uncertainty within just a few hours on Friday after a section of senior leaders in the rebel camp refused a soft compromise.

This has pressed the pause button on merger moves after the frenzy in the evening that indicated that the end of the rebellion was nigh. Chief Minister and leader of the ruling faction, Edappadi K Palaniswami and his predecessor and leader of the rebels, O Panneerselvam, were huddled in intense discussions with leaders of their factions, while a little distance away, the Jaya memorial was decked up with flowers, and flooded with cadre and police personnel. 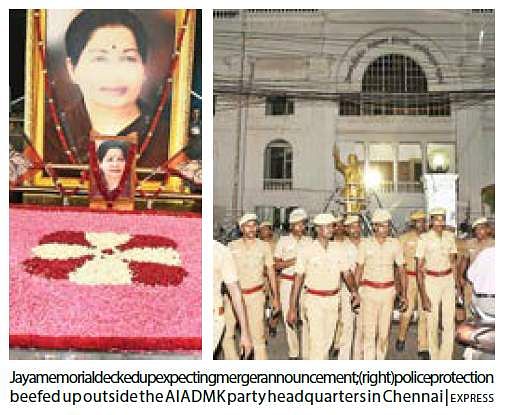 A few MLAs landed there by evening, which by then had a large contingent of media personnel expecting a historic announcement at the same venue where Panneerselvam announced his stunning revolt in February. However, the leaders and cadre, who braved the heavy rain in the evening in anticipation that this was the beginning of the end of the revolt, began deserting the memorial after word spread that the rebels were yet to decide on the terms. The cadre soon followed, and then a section of the police personnel, leaving only a handful of persons, including those from the media, to keep vigil at Marina.

Before long, word came from the rebel leadership that they were not going to make any announcement. Even if they manage to initiate the merger signalling the end of the rebellion, it won’t be the end of trouble for the party. As it became clear that the two sides were on the verge of merger, ousted deputy general secretary TTV Dhinakaran, who has come to become the rallying point for a group of dissenters who have differences with both EPS and OPS factions, openly warned they had the power to disrupt the plans.

“We have MLAs like sleeper cells. We will prove our strength when it is needed,” Dhinakaran told the media in Bengaluru after meeting his aunt and party general secretary VK Sasikala. Dhinakaran and the MLAs in his faction have been maintaining that merger was not possible without his intervention. However, after finding himself pushed further to the margins, he said the present merger would not last long as the two sides have come together for ‘selfish interests and not in the interest of party cadre’.