Scenes at the rain battered southern districts of the State resembled that of a post-apocalyptic movie, with uprooted electricity poles, fallen trees, inundated roads and collapsed houses.

THENI/DINDIGUL/MADURAI/NAGERCOIL: Scenes at the rain battered southern districts of the State resembled that of a post-apocalyptic movie, with uprooted electricity poles, fallen trees, inundated roads and collapsed houses dotting the landscape on Thursday.

While officials had kept evacuation plans at the ready to combat Ockhi, they were at a loss to handle the intensity of downpour and suddenness of calamity, which left four persons dead in Nagercoil alone.

Many trees succumbed to strong winds in Kodaikanal, while the Arulmigu Dhandayuthapani Swamy Temple in Palani suspended the rope-car service due to gale in the hilly terrain. Children and farmers had different reasons to rejoice - schools across Dindigul were shut and a sudden spike in dam levels respectively- but motorists had a tough time negotiating bumper-to-bumper traffic. Battering in many areas, including Dindigul, Palani, Natham, Kodaikanal and Vedachandur, began on Wednesday and only intensified on Thursday. Officials were kept on their toes throughout the day, with removal of uprooted electricity poles and trees occupying most of their time. Power supply was erratic and fallen electricity poles did not help matters either.

Normal life was thrown out of gear and even Sabarimalai pilgrims were not left unaffected when heavens opened up on Thursday. Precautionary directives were issued to make Suruli Falls out of bounds after water inflow spiked in areas near Cumbum. Sabarimalai pilgrims take a holy dip in the falls before proceeding to Kerala. Restrictions imposed by the forest officials would be revoked once normalcy returns.

Revenue Minister RB Udayakumar said that 825 people had been evacuated and put up at 10 camps in Kanniyakumari district. He listed out precautionary measures after chairing a meeting of officials from fisheries and other departments in the presence of Collector Sajjansingh R Chavan at collectorate on Thursday.

He said, 500 trees were uprooted in the deluge, of which 200 had been cleared. Medical and food stock at relief camps were optimum, while allaying fears of flood by stating water levels in dams had not reached full capacity.

Damage by the deluge 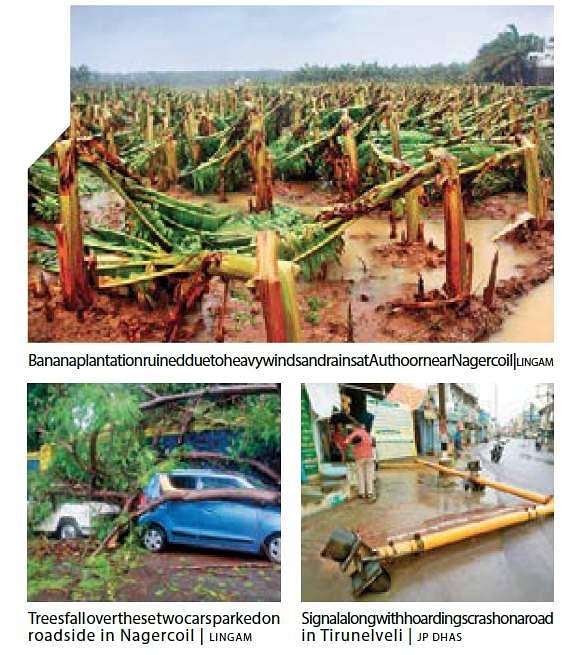 Nagercoil: Cyclone Ockhi on its way to Lakshadweep, left hundreds of trees and electricity posts uprooted, many fishermen missing and at least four dead at separate incidents on Thursday. The first death was from Rajakkamangalam where M Rajendran (40) died when a coconut tree fell on him. He was taken to the Government Medical college Hospital at Asaripallam, where he was declared brought dead. At Ethammozhi, N Kumaresan (55), died when a coconut tree fell on him. The third death was from Mandaikadu. A woman, Saraswathi, died after a tree fell on her when she was in the backyard. In a house collapse accident from Pazhugal, A Alexander (55), died when the roof of his house collapsed. In another incident, 300 temporary shops opened at Kanniyakumari were destroyed.

Holiday for schools, colleges in Virudhunagar 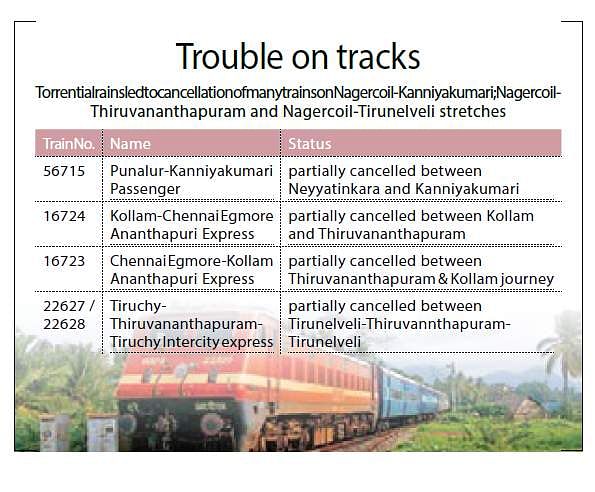 Stay up to date on all the latest Tamil Nadu news with The New Indian Express App. Download now
(Get the news that matters from New Indian Express on WhatsApp. Click this link and hit 'Click to Subscribe'. Follow the instructions after that.)
TAGS
cyclone Ockhi