Water bodies get their fill

The rain gods seem to be making up for giving the skip the last year and leaving Tamil Nadu reeling under the worst drought in 140 years.

MADURAI/ THENI/ DINDIGUL: The rain gods seem to be making up for giving the skip the last year and leaving Tamil Nadu reeling under the worst drought in 140 years. Many rivers in the southern districts are full and so are many dams. On Friday, it appeared that the Moola Vaigai near Varusanadu in Theni is likely to overflow after a gap of four years.

There was torrential rains in many parts of the southern districts. Farmers needed water for agriculture, drinking and their cattle. The Ockhi cyclone seems to have brought the blessing that they had sought. The water level in the Mullai Periyar dam increased by six feet in 24 hours. Currently, it stands at 129 feet. Similarly, the Moola Vaigai that starts from Varusanadu hills was full. Officials from the Public Works Department (PWD) said that there was an inflow of 6,000 cusecs of water into the Moola Vaigai on Friday morning, which reduced to 2,900 cusecs in the afternoon.

Theni District Collector N Venkatachalam declared a holiday for schools considering the safety of the children. The forest department imposed restrictions on tourists and pilgrims visiting the Kumbakarai and Suruli Falls due to the heavy inflow of water. The Sothuparai dam is full.

Subramanian, Executive Engineer, Periyar Vaigai Basin, Madurai, and in-charge of the Mullai Periyar Dam visited Thekkadi, Uthamapalayam, Moola Vaigai and other areas to check the water inflow into the rivers and interacted with the PWD officials.

PWD officials attached to the Vaigai dam expressed happiness over the fact that the skies had opened up to unleash such heavy rainfall. The present water level at the dam is 58 feet. The district administration has alerted all government officials to be geared up to handle any emergency.

V Baskaran, Superintendent of Police, visited the Kottakudi River near Bodi to assess the situation. He cautioned the local people and tourists against taking a bath in the Pillaiar Anai. He also deputed some policemen to monitor the river banks and the surrounding areas.

Dindigul has had sharp showers the past three days. There have been strong winds in Kodaikanal. A team from the Highways Department had to be pressed into action to remove trees that had been uprooted in several parts of Kodaikanal including Fernhill Road and Vilpatti. 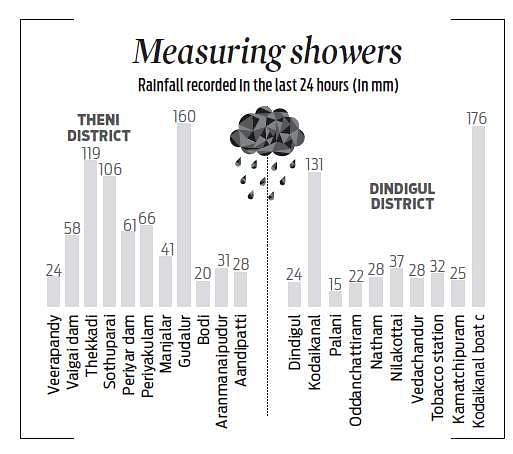