CHENNAI: The by-election to RK Nagar has sprung many a surprise like the entire opposition placed on the one side and unexpected candidates such as actor Vishal on the other. Another surprising development is that the close relatives of AIADMK founder MG Ramachandran, who brought fame to the Two Leaves symbol, and of the late Chief Minister,J Jayalalithaa, who took the symbol to greater heights by making
AIADMK the third largest party in the Lok Sabha, are contesting the polls against the very same
symbol. 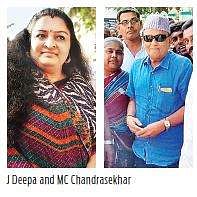 MC Chandrasekhar (70), son of MG Chakrapani, elder brother of MG Ramachandran, has filed his papers on the last day for the RK Nagar by-election as an independent. J Deepa, who also filed papers, is a close relative of Jayalalithaa.Chandrasekhar, who resembles MGR in his attire, told Express, “Though I am a blood relative of MGR, I am not contesting on that claim. The present situation in the AIADMK has caused much pain to me. Until MGR was alive, he kept all family members away from politics just to avoid any criticism from opposition parties that he is encouraging family politics. Though my father and myself were very much aware of political developments, we remained just spectators because of MGR’s diktat.”

Chandrasekhar was engaged in theatre activities in his 20s. In 1981, he also produced a film ‘Nadigan Kural’, starred by MC Sukumar, his brother. But it has never seen the light for many reasons. Right now, he is engaged in real estate business.

Chandrasekhar is also planning to launch his own political party, MGR Anna Dravida Munnetra Kazhagam after MGR birth anniversary January 17. But he declined to reveal further details on that.
Asked about the present problems faced by the AIADMK, Chandrasekhar became upset and said “Only due to the loose talk of a few ministers, the party is facing the present situation. Otherwise, the party would have remained united and the government also would have continued as it was after the death of Jayalalithaa.” However, he refused to elaborate further.

“It is is the hands of the people”, was his reply when asked whether the ruling party would win this by-election. However, he added that though the leaders were not united, still now, the grassroot-level cadre stood for the party.Chandrasekhar is planning to begin his campaign in a few days along with his supporters, without much fanfare in RK Nagar.

Stay up to date on all the latest Tamil Nadu news with The New Indian Express App. Download now
(Get the news that matters from New Indian Express on WhatsApp. Click this link and hit 'Click to Subscribe'. Follow the instructions after that.)
TAGS
Election DMK AIADMK MGR J Jayalalithaa by poll RK Nagar Vishal Deepa