Deadly mix: Paying with lives for profits and pest-free yield

Unscientific use of insecticides and pesticides has resulted in the deaths of many farmers growing genetically-modified cotton across the state.

TIRUCHY/PERAMBALUR/ARIYALUR:  Azhaguthurai regained consciousness. He was placed on the ventilator in the Intensive Care Unit of a private hospital in Tiruchy for two days. Azhaguthurai’s family was waiting outside, fearing the worst, understandably after hearing news that two of his friends who sprayed chemicals on cotton fields on the same day as Azhaguthurai did not survive.

Azhgahuthurai was a perfectly healthy 40-year-old farmer from Sithali without any chronic illness until that fateful day on October 24, when he wore a battery sprayer on his back, loaded with a mixture of Profigun, an organophosphate mixed with Luphos 36, a variant of Monocrotophos, and sprayed on his cotton field. Little did he know that Monocrotophos was banned in 46 countries across the world and can be even riskier if he mixes that pesticide with an insecticide as poisonous as ‘Profigun’. But he knew that, Raja, his fellow villager from Sithali and Selvam, a neighbouring villager from Othiyam, were spraying the same mixture too.

The result, all three were taken to at least three hospitals in Perambalur and Tiruchy after profuse vomiting, uneasiness, and dysentery. Only, Azhaguthurai made it alive. Raja and Selvam’s deaths were the first among six deaths reported from the state. Express reported Raja’s death in the edition dated October 27, and this reporter was surprised that the local police station did not register a case. Raja’s death was followed by Ramalingam of Koothur in Alathur taluk in Perambalur district.

Arjunan from Pasumbalur(Veppenthattai taluk) died on November 15. Suresh Kumar in East Rajapalayam of Gangavalli taluk in Salem district (November 25) and Ramar in Kallakudi of Ariyalur taluk in Ariyalur district (November 27) followed. All had similar effects after spraying chemicals before being admitted to hospitals and dying despite treatment. Their land ownership reportedly ranged from none to three acres of land. While some farmers in Perambalur district like Azhagauthurai, whose family was able to afford advanced treatment in private hospitals, reportedly survived, some only managed to barely make it. None of the fatalities that occured due to occupational hazards — while spraying chemicals — were registered in police stations.

A report by a factfinding committee formed by eminent environmentalists stated that the number of treatments and hospitalisations due to the application of chemicals on cotton fields from Mid-October till date is roughly between 200 and 300. All of them had reportedly cultivated Bacillus thuringiensis cotton (Bt cotton), a genetically modified crop which was introduced in India in 2002.

“When the genetically modified crops were introduced in India, they were never meant to be a means of yield enhancement. They were only intended for plant protection. It was said that they contained some in-built characteristics which could turn poisonous for pests and thereby, do away with the use of pesticides. Now, if the GM crops have failed in its main purpose of being nonsusceptibile to pests, and non-usage of pesticides leading to healthy cultivation, then there is no need to follow such a technology,” said Kavitha Kurgunti, one of the conveners of Alliance for Sustainable and Holistic Agriculture (ASHA), who lead the fact-finding committee that visited all six deceased farmers.

When this reporter met Perambalur District Collector V Santha in her office on December 7, she acknowledged the deaths of Raja and Selvam, but blamed them for being ‘drunk and inebriated’. She also referred to Arjunan from Pasumbalur as a ‘dialysis patient’. “Despite their ‘mistakes’, we, the district administration had reached out to ‘Commissionerate Of Agriculture’ for relief for two farmers on humanitarian basis,” she said. Santha further stated she did not hear about Ramalingam’s death as none of his family members met her after he died on October 30. 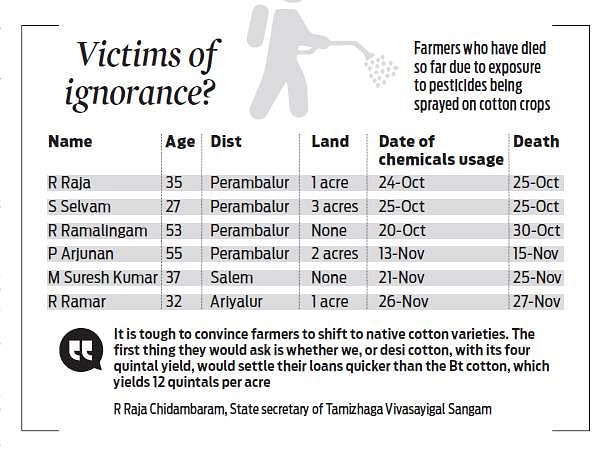 When asked if the district administration was pro-Bt cotton, she replied, “Why would I promote something which I do not understand fully in first place? I want to see organic farming flourish as well. However, we do not interfere with farmer’s choices”. The claims made by the district collector were contested by the grieving families. “My husband never had the habit of drinking. Why would he do that to himself intentionally while knowing I have three children,” said Selvam’s wife Anandhi. Among the six farmers, autopsies were conducted for S Selvam, P Arjunan, and M Suresh Kumar. A senior medical official in Perambalur, who was among the first to run through the reports of Selvam’s autopsy, confirmed to this reporter in late October that the death was inhalation while applying pesticides. He also ruled out Selvam had any liver ailments due to alchoholism.

“The disease attack in Bt cotton is prevalent because of an ambitious cultivating practice. When sowing, many farmers sow two seeds in one place. When the seeds bud as ‘crop stalks’ the farmers do not uproot one of the stocks to allow the other stalk by the 30th day to grow without congestion. Crop congestion and canopying create a density for easier pest infestation.” Sudharshan called the deaths “unfortunate”. He added that the department was spreading awareness through programs for farmers and also by providing safety equipment for at least 400 farmers so far in the district. “The users should not spray against the wind.

They should spray before 10 am and after 4 pm to avoid sweating and exhaustion in heat. They should consume food and beverages in the middle. They should take necessary breaks in between to catch a breath,” he added. “Pest attacks are largely caused by moisture, crop canopying, high humidity and hypersensitivity caused due to the changes in monsoon pattern. The change will, in turn, lead to lack of nutrition when the crops get congested,“ said P Latha, a researcher from Tamil Nadu Agricultural University. Another researcher from the same university, K Senguttuvan, said, “The chemicals and the dosages are meant for different purposes.

The users should never try a combination of chemicals for different purposes, like mixing a pesticide with an insecticide.” Some researchers discourage the use of pesticides, insecticides and herbicides. K Pandian, a senior researcher in Periyar Maniammai University in Thanjavur, said, “Chemicals pollute the soil by killing microbes and beneficial insects.” Now, the crops in the cotton fields which were planted in mid-August reached a height of five to six feet as of now. It is also found that when the farmers apply from a height which is the level to their nasal cavity, they risk inhaling the chemicals. Anantha Sayanan, an activist who writes columns about safe food and sustainable agriculture, called the projection of net revenue generated by Bt cotton as exaggerated.

“Only one out of ten farmers reach an ambitious yield target between 10 to 12 quintal per acre. Even if the higher yield of Bt cotton is possible, the net revenue generated by desi cotton is still better as the investment taken for desi cotton is twice as less compared to Bt cotton. Besides, desi cotton rarely attracts disease unlike Bt cotton.” He added that genetically modified technology was allowed in India as it is not a major food crop. But when people consume cottonseed oil and cotton milk, they are likely to consume pest attacked and chemically sprayed cotton byproducts, he warned. V Swaminathan, an organic farmer who coordinates at least 30 farmers across Perambalur district said, “We tried to bring an almost-extinct variety like Karunkanni purely because of our interest in organic farming.

Cotton once used to be cultivated in an intercropping method (growing two or more crops in proximity). We are predominantly doing polyculture (using multiple crops in the same space). Karunkanni is also drought tolerant variety.” He added that their cultivation is that they did not get any disease attacks. “Tamil Nadu is not the first to see this level of calamity. At least 30 farmers have died so far due to occupational hazards of pesticides in Maharashtra. A few states like Maharashtra, Sikkim, and Kerala have been taking steps to stop failing Bt cotton and ban the hazardous organophosphates and organochlorides. Perhaps it’s not too late for TN to follow suit,” said Kurgunti.

Stay up to date on all the latest Tamil Nadu news with The New Indian Express App. Download now
(Get the news that matters from New Indian Express on WhatsApp. Click this link and hit 'Click to Subscribe'. Follow the instructions after that.)
TAGS
Farmers Cotton farming insecticides and pesticides farmer deaths