TIRUPUR: Moments after principal district and sessions judge Alamelu Natarajan delivered the verdict in Shankar murder case, condemning six of the 11 accused, the focus shifted to a 20-year-old feeble-looking girl at the court premises. To prove that looks can be deceptive, one needed to look no further than the frail girl whom media persons were surrounding for a byte. Gowsalya had won a major battle in her fight against social injustice in a casteist society, against all odds. If there was any conflict of emotions nagging her mind, it was not easily visible as she thundered that her war had only begun. So what if among those arraigned and convicted was her father, she had ensured justice for her husband murdered in broad daylight at Udumalaipet last year.

On March 13, 2016, killers hired by Gowsalya’s parents swooped down on the unsuspecting couple at a public place and hacked her husband Shankar to death in front of her eyes. A grievously injured Gowsalya took the fight to her parents, and by extension to the deep-seated casteist prejudices, to get the noose for six of the 11 accused, including her father Chinnasamy. Only three of the accused walked away: Gowsalya’s mother Annalakshmi, maternal uncle Pandithurai and one Prasanna Kumar.

While the judgment was hailed as landmark for coming down heavily on so-called honour killing, experts believe that the harsh punishment penned by the judge would act as a deterrent to those taking cover under societal honour and prestige. PS Krishnan, the architect of SC/ST (Prevention of Atrocities) Act, 1989, and the SC/ST  Amendment Act, 2015, believes: “The verdict sends a strong warning to people. The severity of the punishment shows the seriousness with which honour killings would be dealt with by the law. The verdict is not about a single murder but the brutality with which it was executed.

It was not only about the anger of parents, whose daughter married a Dalit boy but the impudence with which the murder plot was hatched and executed that warranted capital punishment.” Krishnan was the mind behind the Act, which played an instrumental role in punishing the guilty.

Another facet to the trial was the speed and efficiency with which the judiciary functioned, investigators handled the case and the prosecution argued for maximum punishment. The role played by Gowsalya was instrumental insofar as she stood her ground against the community and her family while testifying against the perpetrators, whose misguided sense of social honour nipped a family in bud.
Vincent Raj, known better as Evidence Kathir, gives an insight into how the term honour killing was coined in Tamil Nadu’s context. “It is relatively a newer term here. It was first used when a caste Hindu girl was murdered for marrying a Dalit boy.

The brutality of torture meted out was unprecedented. She was tied using a dog’s chain, given food in the canine’s plate and was kicked by whoever went past her. Later, the whole village pooled money, cleaned their houses and whitewashed the temple to cleanse the sin caused this lowly union. After three days of torture, she was administered poison through an injection and murdered. This happened in Nilakottai. It was after that incident that Evidence as an organisation came into being. It was we who used the term first. However, the death was dismissed as a suicide under IPC section 174.

We could not do anything.” While the term has gained traction in media circles ever since, honour killing is not confined to the couples alone. Kathir says the ramifications of their actions, sometimes, percolate down to their families as well. A case in point is an incident reported from Tirunelveli, where a Dalit woman, Kalpana, was murdered in May 2013 after her brother eloped with a caste Hindu woman. “The girl’s father was on the lookout for the boy. When the couple was not found, the girl’s father directed his anger on Kalpana, who was pregnant at the time. She was murdered in front of her under two-year-old son. A Tirunelveli court awarded capital punishment to the perpetrators.

The point here is not only the couple but caste atrocities in the honour killing can extend to anyone concerned,” says Kathir. However, honour killing does not mean broad daylight murder alone. Kolathur Mani, a DVK leader, says, “Honour killing is not about killing alone. It includes forcible suicides or well-planned murder. Most incidents go unreported as perpetrators are parents.”

While Gowsalya held her own against the societal and parental pressure, a protracted legal tussle is not everyone can afford or withstand. The answer lies in a special legislation, opines Kathir. “Honour killing needs to be tackled under a special Act. While SC/ST Act played a major role in the Shankar case, the victims need not be from the Dalit community every time such incidents occur. Maximum punishment should be awarded to the perpetrators in such cases, and for that to happen, it is necessary to enact a special legislation,” says Kathir. 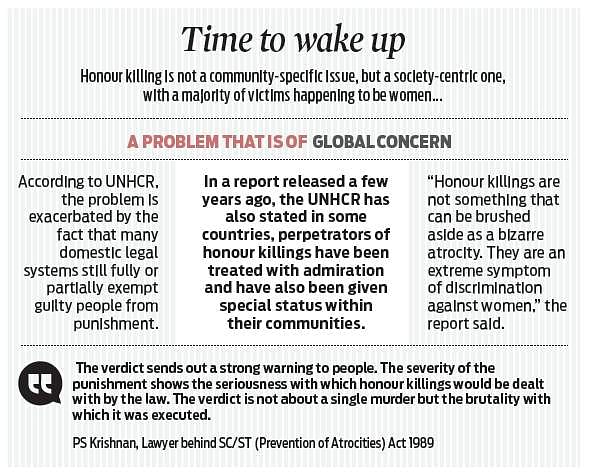 Students, girls being used to create unrest besides rift between faiths: Karnataka minister