Alagiri now gets chance to go for Stalin’s jugular 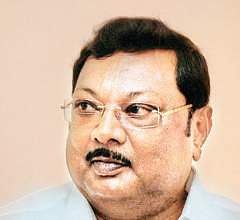 A former organising secretary of South Tamil Nadu, Alagiri said Stalin was unfit to be party chief. “It’s time the top and second-level leaders introspect over recent failures and take corrective action,” he told The New Indian Express. Alagiri has had a grudge since his ouster by father and party president M Karunanidhi, at Stalin’s behest. On Wednesday, Alagiri slammed Stalin, saying DMK couldn’t win even one election because of lacklustre leadership.

Seeking a change at the helm, Alagiri claimed he was articulating the demand of party workers at the grassroots level. Stating that functionaries occupying the first and second tiers of leadership lacked sincerity, he said they had never bothered about the growth and welfare of DMK.

Alagiri charged that genuine workers were not given prominence. Instead, importance was given to those who had defected to DMK.

Until Karunanidhi was fit, the party had won several elections as well as by-elections. But for the past four years, DMK had not won even a single election, particularly under the leadership of Stalin, he pointed out.

What about Sankarankoil, asks Stalin’s aide